James Francis Boylen a.k.a. Jim Boylen is an American professional basketball coach who most recently was the head coach for the Chicago Bulls of the National Basketball Association (NBA). Previously, he served as head coach for the University of Utah (2007-2011), leading the team to win the 2009 Mountain West Tournament champion.

How Much Is Jim Boylen Net Worth?

A professional since 1987, Jim Boylen has summoned a staggering sum through his career. Most recently, he served as the head coach at Chicago Bulls where his annual salary is $1.6 million. Before, he had the role of assistant coach at various NBA teams. According to the source, the average salary of an assistant coach in the NBA is $0.5 million. 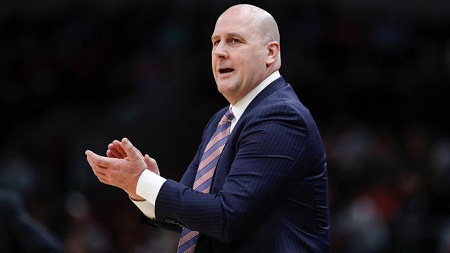 Moreover, he also served as head coach at the University of Utah where he reportedly had an annual salary of over $500,000.

A matter of fact, Boylen is a private person and has always lived his personal life low key. He is nowhere to be found on Instagram but is seems active on Twitter but only to announce his professional stuff.

Born to American parents, Boylen attended the University of Maine, where he was a captain during both his junior and senior seasons. During his senior year, he was named First Team All-North Atlantic Conference honors after averaging 21 points per game. That same season, he finished runner-up in the conference Player of the Year voting to Northeastern's Reggie Lewis. In 1987, he earned a bachelor's degree in business from Maine.

On 27th March 2007, Boylen was appointed the head coach at the University of Utah. After the 4t season, the program fired him.

On 17th June 2015, he was appointed the associate head coach of the Chicago Bulls. On 3rd December 2018, he was promoted to head coach after Fred Hoiberg was relieved of his duties after a 5–19 start to the 2018–19 season. On 14th August 2020, the Bulls fired Boylen following a 39–84 record in two seasons without a playoff appearance and had the second-worst winning percentage in franchise history (minimum 100 games) behind Tim Floyd.