Mike Penberthy (fully Michael Dunkin Penberthy) is an American professional basketball coach and former player who currently is an assistant mentor for the Los Angeles Lakers of the National Basketball Association. As a player, he is known for winning an NBA championship in 2001 with the LA Lakers.

Penberthy was born in Los Gatos, California on November 29, 1974. A high school graduate of Herbert Hoover, Fresno, California, Penberthy played college basketball for the Master's College in Santa Clara. He broke numerous records as a collegiate player and was a 2 time NAIA All American. He has a bachelor's degree in biblical studies.

Penberthy aimed for 7the Indian Pacers but couldn't make the team due to his torn right hamstring. He later joined the Continental Basketball Association team Idaho Stampede. He then moved to the German team Hamburg Tigers. Due to the NBA locking out its players in the summer of 1998, Penberthy worked as a forklift driver at Turk Terk, a company then managed by his cousin. The following fall, he joined the CBA team Quad City Thunder but was cut due to a sprained right ankle. 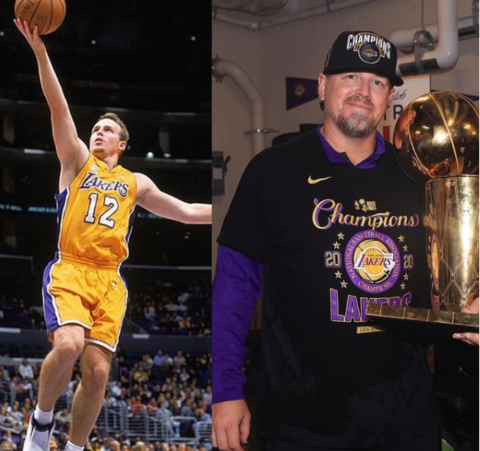 From April to June 1999, the six-foot three-point guard played for the Venezuelan team Cocodrilos de Caracas. He played 56 NBA games with the Lakers and had averages of 4.9 points, 1.3 assists, and 1.2 rebounds per game while playing 15.4 minutes per game on average. After leaving the Lakers in 2001, he played basketball in Italy and Germany and competed in the ULEB Cups of 2005, 2006, and 2007.

With Alba Berlin, he won the German Cup of 2006. Four years later, he signed with the Los Angeles Slam of the ABA.  Penberthy began his coaching career in the 2014-15 season, becoming the shooting coach for the Minnesota Timberwolves. He served in a similar position at the New Orleans Pelicans in the 2018-19 season. He returned to the Lakers in the summer of 2019, only this time as an assistant coach. He won his second championship when the Lakers defeated the Miami Heat in the 2020 NBA Finals.

Mike Penberthy's Salary and Net Worth

Penberthy's net worth estimation is one of the tricky concepts to deal with given that the NBA hardly discloses coaching salaries for either head or assistant. His undocumented paychecks prior to his coaching career also make it harder to grasp the knowledge of his assets and monetary gains he had collected from his playing time. 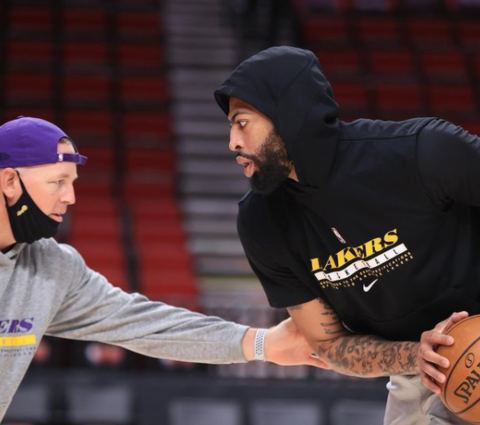 While the Bureau of Labor Statistics does not compile information specifically for NBA assistant coaches, it does show that the average salary for all coaches and the scouts at the college, university, or professional level was around $100,000; with the highest earners reportedly raking in as high as $750k to even $1million a year.

Assistant coaches' salaries in the NBA fluctuates heavily on factors such as the team's budget, its reputation, and coaches' experience. With the Lakers being one of the wealthiest teams in the NBA world and considering Penberthy's above-average edge both as a player and as a coach, he must be pocketing in salaries in the upwards of $500,000 or so.

Mike Penberthy's Wife; Does he have Children?

The former Lakers point guard is married to his wife, Wendy Jones. She is also a former student at the Master's College and was one of their greatest volleyball players. She was part of the winningest squads in the school history with her team recording 35 wins in 1993 and 31 in 1996. A native of Visalia, California, Wendy was a three-time NAIA All-Far West First Team honoree. 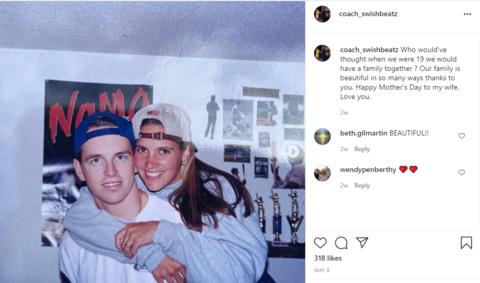 Mike Penberthy's wife, Wendy graduated from the college with a degree in Liberal Studies (teacher education emphasis) in May of 1997 and married Mike Penberthy a few weeks later. SOURCE: Instagram

She graduated with a degree in Liberal Studies (teacher education emphasis) in May of 1997 and married Mike Penberthy a few weeks later. She traveled throughout the US and Europe in part to her husband's international basketball career. The couple share three children, Ty, Jaden, and Kate. Mike and Wendy first met each other when they were just 19.