Landon Bussie is the kind of person who doesn’t like to back up and continues to follow his interests. Due to that same behavior, he was able to be a well-known basketball player, who later focused on coaching and making other players great. Currently, Bussie is working day and night to ensure that his Alcorn State Braves men's basketball team reaches the top of everything.

Hailing from the suburbs of Baltimore, Maryland, Landon Bussie was born in 1988 as Landon E. Bussie. His father’s name is Gerald Bussie, and his mother’s name is Loretta Bussie. Sadly, he suffered a huge loss when his father passed away. In those tough times, he was supported by his relatives, family members that included his mother, uncles, and two siblings, a sister named Asya, and a brother named Gerald.

Other than that, it is known that he first studied at Woodlawn High School and then enrolled at the Xavier University of Louisiana to study Psychology. After earning a degree in Bachelor of Science in 2010, he once again joined the same university for his MEd in Educational Leadership—graduated in 2014.

Landon was interested in basketball from his teenage years. However, his interest wasn’t that much in playing the sport as much as it was in coaching. Maybe, that’s the reason why he began coaching after playing basketball for two years only during his stay at the Xavier University of Louisiana. 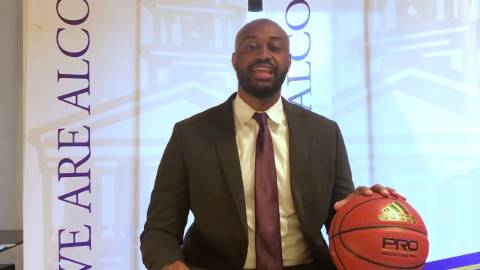 As an assistant coach, he was able to win three straight GCAC regular-season championships and four back-to-back appearances at the NAIA Championship Tournament. Later, when Bussie graduated, he left the assistant coaching responsibility too.

Soon, he was hired by Prairie View A&M University as their men’s basketball assistant coach in April 2014. There, he served for six long years and managed to take the team to the next level.

After his tenure at Prairie View A&M University ended, he signed a deal with Alcorn State University in April 2020 and officially became the head coach of the men’s basketball team.

Ever since that day, he has impressed many peoples with the brilliant skills and tactics that he taught to his players.

Landon Bussie has managed to astonish everyone through his coaching skills and has managed to take every team he has coached to the next limit. With that noted, it must be true that he is being paid an incredible sum that matches his amazing coaching style.

Landon E Bussie worked as an Assistant Men's Basketball Coach for Prairie View A&m University (PVAMU) and in 2017 had a reported pay of $4,208.33 and a pay frequency of monthly according to public records.

So, how much does he earns, and how much is his net worth? Well, it’s unfortunate to say that the American basketball coach has not disclosed his career earnings, which also keeps his net worth in the shadow.

The Baltimore, Maryland native basketball coach is very private about his life, so much so that he does not even have an Instagram handle. The only social media platform he uses is Facebook.

However, he rarely uses Facebook and has not given updates on anything since a long time ago. As a result, no information could be grabbed on his romantic relationship, if he has any.