Mike Brennan is a famous American basketball player turned coach who has managed to amass the limelight for his brilliant skills as a player and as a coach. As a professional coach, he is currently signed as a head coach for the American Eagles men's basketball team. Speaking of his playing career, he has contributed to different international basketball teams.

Hailing from the suburbs of Elizabeth, New Jersey, United States, Brennan was born in 1972. He celebrates his birthday on the 18th of May every year. Likewise, his birth name is Michael Richard Brennan. His father’s name is Rich Brennan, and his mother’s name is Joann Brennan. There is no information about whether Brenan is the only child of his parents or has any siblings. Nonetheless, it is known that he went to Princeton University and graduated with a bachelor's degree in English in 1994.

Career: From a Player to a Coach

Brennan was always a fan of basketball. Even while studying, he used to play for the respective high school/university team. And, when he graduated from Princeton University, he decided to go professional and went international. 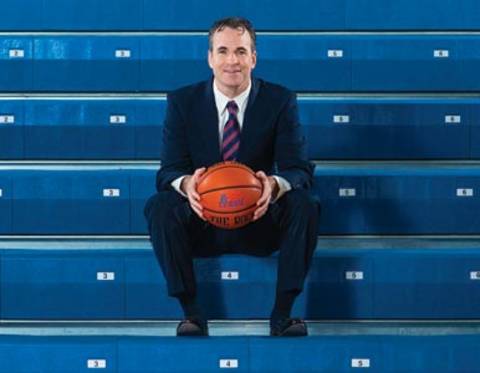 While playing professional basketball at the international platform, he joined different teams of different countries such as Germany, Portugal, and Belgium. Later, he decided to quit playing and shifted his focus to coaching basketball teams.

After his tenure at Georgetown University ended in 2013, he was once again called by the American Eagles. However, this time, he was called to work as a head coach. And, ever since that day, he has proved why he was assigned as the head coach.

Mike Brennan is a very private guy. Due to that, he has not shared any whereabouts regarding his earnings and net worth.

However, with such a good career as a player and a coach, it must be sure that he earns a very healthy sum that is enough to provide him his day-to-day basic needs and more.

The Elizabeth, New Jersey native basketball coach, is a married man. He shared the wedding vows with his lovely partner, Alana Woodard. His wife hails from Seattle, Washington. Other than that, there is no information regarding Brennan's wife.

As for their children, the beautiful couple is yet to welcome any children. Currently, the duo is residing in their Northwest D.C house.