Michael David Adamle a.k.a. Mike Adamle is a former American NFL player who was drafted in 1971 and had a stint with franchise Kansas City Chiefs (1971–1972), New York Jets (1973–1974), and Chicago Bears (1975–1976). Later, he found success in sports broadcasting serving for WLS-TV, WMAQ-TV, and WBBM-TV. Additionally, he worked for WWE as an interviewer, play-by-play commentator, and also was the General Manager of Raw.

Euclid, Ohio native, Mike Adamle was born on 4th October 1949, under the star sign Libra. The seventy-one years holds an American nationality and is of white ethnic background. He is the son of Tony Adamle, a former football player for the Cleveland Browns who later became a physician.

As of 2021, Mike Adamle has an estimated net worth of $1 million. A former NFL player, he has summoned a decent of money playing six seasons in the NFL with three different franchises. According to the source, the average salary of a football player during the 70s is ranged from $20,000 to $60,000. Many of the professional football players had to have second jobs to support themselves and their families.

Kim Adamle is the Wags who is the wife of Mike Adamle. The duo met on the set of American Gladiators in 1989. Soon the couple fell in love and started dating and eventually exchanged vows. 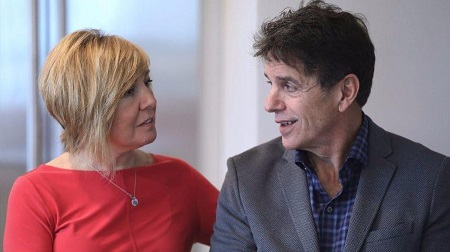 However, their marital bliss turned into rock after few years. In 2010, Kim filed for divorce. Nevertheless, Adamle and his wife reconciled. They share four children: Brad, Courtney, Alexandra, and Svetlana, who is adopted from Ukraine as a teen. Currently reside in Evanston, the couple is grandparents of three.

An epileptic patient, he currently is a member of the Greater Chicago division's board of directors at Epilepsy Foundation. In 2017, he was diagnosed with Dementia which led to official retirement from his career.

A graduate of Theodore Roosevelt High School, Mike played college football at Northwestern University in the Big Ten Conference. In the 1971 NFL Draft, he was picked by the Kansas City Chiefs where he would two seasons. Further, he played four years in the league, two seasons each with New York Jets and Chicago Bears respectively.

After retiring from playing football professionally, Adamle joined NBC Sports, where he was both a studio host and sideline reporter for various events, where he would six years hosting SportsWorld and pre-game shows. From 1989 to 1996, he was the co-host of American Gladiators.

In 2008, he started working for WWE as an interviewer. Executive Vice President Shane McMahon introduced Adamle as their new General Manager for the Raw brand on July 28, 2008, episode. During his stint as GM, he promoted various high-profile fights that he named "Adamle Originals." On the October 27 episode of Raw, he slapped Randy Orton after Orton insulted him personally (as part of his storyline). The next week on Raw,  Adamle resigned from his role as general manager.

After that, he returned to football and became the play-by-play announcer for the Chicago Rush of the Arena Football League.