Michael Crabtree is a former American football player. He played in the National Football League from 2009 until 2019. Michael played as a wide receiver for his team. Crabtree won the  Fred Biletnikoff Award as the nation's best wide receiver.

Michael Crabtree was born Michael Alex Crabtree Jr. on September 14, 1987, in Dallas, Texas. He is among the two children born to Michael Crabtree Sr and his wife, Bessie Turner. Michael has a brother named Todd Crabtree. After graduating from David W. Carter High School, Crabtree enrolled at Texas Tech University. Talking about his physical appearance, Michael stands six feet and one inch tall and weighs 98 kg.

Michael Crabtree has an estimated net worth of more than $30 Million. He credits most of his net worth through his successful career as NFL. Crabtree earned the most from his decade-long career at the NFL. Michael signed a $32 Million contract for six years with the San Francisco 49ers. The contract had a $17 million guaranteed salary and $8 million more than offered by the team in August 2009. 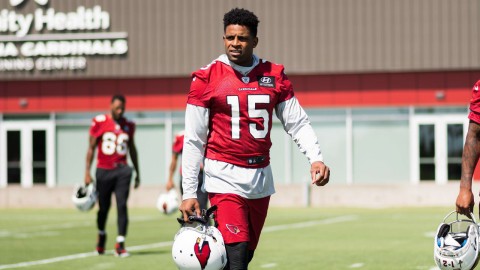 Michael played in the NFL for more than ten years SOURCE: Azcardinals

In 2015, Crabtree joined Oakland Raiders and signed a $3.2 million contract with $1.8 Million as an incentive. At the end of the season, He agreed to extend the contract to a 4-year, $35 million extensions. After spending his four seasons with the club, In 2018, Baltimore Ravens signed him for a three-year, $21 million contract with an $11 Million guaranteed amount. Totaling his prize money from the games, It sums to $64,638,581.

Michael is a proud father of a son, Michael Crabtree III. He has not shared a word about the biological mother of his son. Unlike other retired players, Michael does not show much presence on social media and has not shared about his relationship status. Crabtree could be single, dating, or engaged to someone.

In 2019, Michael was seen attending a game with Linda Heidy. None of them ever shared a word about their relationship and have never been seen together to date.

A Decade Career at NFL

Michael played basketball and football in High School. After completing High School, Crabtree joined Texas Tech University with an athletic scholarship. He was redshirted in his freshman year and finished the season with 134 receptions, 1,962 yards, and 22 touchdowns. In his sophomore year, Crabtree had an excellent season and was even featured on the cover of NCAA football 10 for Xbox360. Michael has received multiple honors due to his accomplishments at Texas Tech.

Crabtree listed his name for the 2009 NFL draft. The San Francisco 49ers drafted Crabtree as the tenth overall pick in the 2009 NFL Draft. In October 2009, The player signed a six-year contract worth $32 Million. He had a good season and a great time with the club. In 2014, Michael finished his 49ers career with 347 catches for 4,327 yards and 26 receiving touchdowns. The player then signed with Oakland Raiders for a season but was extended for four-season.

In 2018, Michael moved to Baltimore Ravens and signed a three-year contract but was released by Ravens in February 2019. He then signed with Arizona Cardinals but got released and announced his retirement shortly.