Graham Gano is a well-known American football placekicker. He has been playing in the National Football league for the New York Giants. During his time with the Panthers, he achieved the franchise's record for the longest field goal at 63 yards in 2018. Gano was part of the 2017 Pro Bowl Team.

Graham Gano was born Graham Clark Gano on April 9, 1987, in Arbroath, Scotland. He is the son of Mark Gano and his wife, Brenda Gano. His father was a United States Navy Master Chief Petty Officer and Vietnam veteran. Mark was stationed in Scotland while Graham was born. Gano spent his early childhood in Cantonment, Florida, where he attended J.M. Tate High School. After graduating from High School, Graham enrolled at Florida State University. Talking about his physical appearance, Gano stands six feet and two inches tall and weighs 92 kg.

Know About Graham Gano's Net Worth, Contract, Salary, and Earnings

Graham Gano has an estimated net worth of more than $10 Million. He has earned most of his net worth through his career as a placekicker in the NFL. In 2020, Gano signed a three-year contract with the New York Giants. As per the contract, He will receive a guaranteed amount of $9.5 Million and have an annual salary of more than $4 Million. 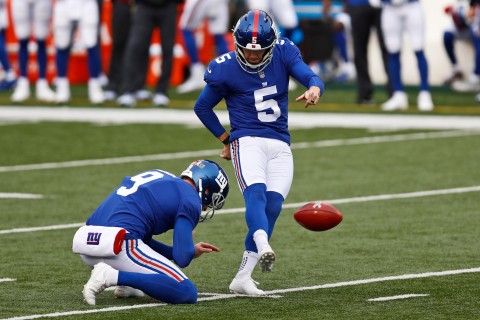 Graham strikes the ball in an NFL game SOURCE: NJ.

In his first year of the contract, Gano took home $1,750,000 as his base salary and $1 Milion as his signing bonus, and $3 Million as his cap hit. Before joining the Giants, Graham worked for the Carolina Panthers. He had an annual salary of $3 Million. In 2014, Gano had signed a new four-year contract with the Panthers worth $12.4 million. In 2018, Panthers extended the contract worth $17 Million for four years. Totaling his career earnings, It sums to $33,698,439.

Who is Graham Gano Married To? His Wife and Children

Graham Gano is married to his longtime girlfriend, Brittany Gano. The love birds walked down their wedding aisle in 2010. They had been dating for several years before their marriage.  Graham and Brittany are the proud parents of five children. They have two twins, among which three are boys, and two are girls. Graham shares a photo with his wife and children SOURCE: [email protected]

The family of five is living a happy married life. Although It's been more than ten years of their marriage, there has been no rumor of the couple having ups and downs in their married life.

Graham played numerous sports in High School. After graduating from High School, He played for the Florida State Seminoles as a kicker and punter. After graduating, Gano listed his name for the 2009 NFL draft but went undrafted. Baltimore Ravens signed him as a free agent. The player moved to Las Vegas Locomotives before cementing his place with the Washington Redskins in the 2009 season.

In 2012, Gano moved to Carolina Panthers and signed a two-year deal. Panthers extended the agreement until 2018. He was one of the most prominent players on the team. In 2017, Graham was named into the Pro Bowl, replacing Greg Zuerlein. The Following season, Both the parties extended the contract for four years but moved to New York Giants in early 2021 and signed until 2023.