2018 WNBA Champion, Mercedes Russell is an American professional basketball player who is currently signed to the Seattle Storm of the Women's National Basketball Association (WNBA) as well as WNBL side Southside Flyers.

Springfield, Oregon native, Mercedes Russell was born on July 27, 1995, under the star sign Leo. 6 ft 6 in tall, she holds an American nationality who belongs to the mixed ethnicity.

Additionally, she earns a decent sum playing for WNBL side Southside Flyers. According to the source, all WNBL players are now being paid, with a minimum wage of $7500 in place for the first time.

Looking at her contract and earnings, Russell's net worth in 2019 is approximately $0.1 million.

Blessed with a tall height of 6 ft 6 in, Russell is yet to disclose her relationship status to the world. 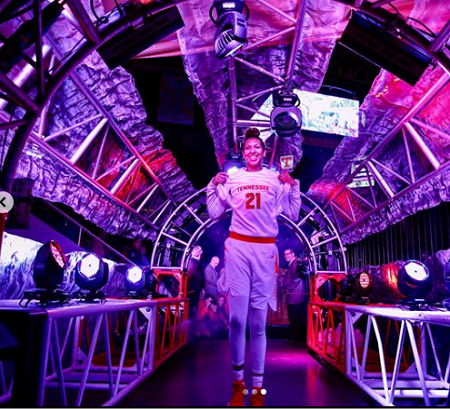 The basketball player seems to a very confidential person when it comes to her private life. Active on Instagram with 15k followers, she only posts her profession related pictures.

Family members from her hometown call her Bones while former Tennessee Volunteer teammates nicknamed her Slim,” which is a homage to her long and lean 6-foot-6 and 195-pound frame.

She graduated from the University of Tennessee, majoring in communications studies.

Russell was picked by the New York Liberty at the 2018 WNBA Draft in the second round. Upon her WNBA debut with the Liberty, she was waived by the team. Soon, she joined the Seattle Storm and would take home a WNBA Championship in her first professional season. Further, she posted a career-high 8 points and career-high nine rebounds against Dallas.

Besides WNBA, she signed to the Southside Flyers in Australia's Women's National Basketball League (WNBL) in 2019.