The undefeated MMA fighter, Maycee Barber is currently signed to the Flyweight division in the Ultimate Fighting Championship (UFC). She is ranked #9 in the UFC women's flyweight rankings as of 10th December 2019. Earlier, she competed at Legacy Fighting Alliance.

A.k.A The Future, Barber, is expected to face UFC Women's Flyweight Championship, Roxanne Modafferi, on January 18, 2020, at UFC 246.

Greeley, Colorado indigenous, Maycee Barber, was born on 18th May 1998, under the star sign Taurus. The twenty-one years holds an American nationality who came from the White ethnic background.

How Much Is Maycee Barber Net Worth In 2020? Know Her Income Source

There are various ways a professional MMA fighter can earn money; there are also endorsement and sponsorship opportunities, besides show money.

Aforementioned, the flyweight fighter has a sponsorship deal with various brands, which is monetarily beneficial for her. Her Sponsors are listed below:

Rather than being involved in a romantic relationship, Maycee Barber is much focused on her MMA career. Most of the time she is into MMA training. No to mention, almost all pictures on her Instagram is from MMA. 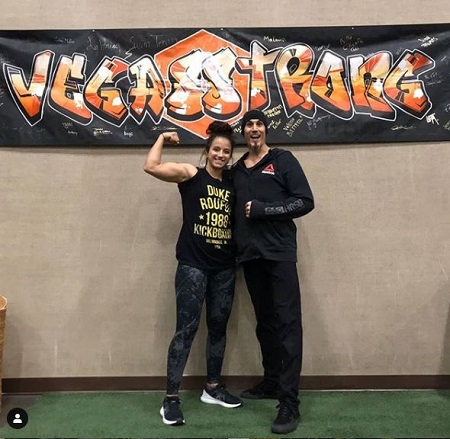 Currently, on her early twenties, Barber is yet to find her better half.

Sliding Into Paige VanZant husband’s DMs To Get A Fight

Barber eagerly wanted to fight against Paige VanZant.  Even, she slides into VanZant's husband's DMs trying to get a match. But VanZant responded, refusing to fight, saying she isn’t worthy of her time. Further, VanZant added, “Actually, I was going to say ‘yes’ to the fight, but I think it’s completely inappropriate to slide into someone’s husband’s DMs trying to get a fight."

Barber was born to parents: Bucky Barber and Maryanne Barber and raised alongside sibling, Emma Barber.

Since her tender age, Barber started pursuing mixed martial arts (MMA) and set her eyes on becoming a professional fighter. In an interview, Barber's father said: "At that point, it was, 'OK, the better we make her as a fighter, the less damage she's going to take.' So we started to travel, and we took her literally all over the United States."

In 2018, Barber signed to UFC, making her debut on November 10, 2018, at UFC Fight Night: Korean Zombie vs. Rodríguez against Hannah Cifers. She tasted the victory via TKO in round two.