Maxx Robert Crosby a.k.a. Maxx Crosby is an American football player who is signed to the Oakland Raiders of the National Football League (NFL) as their No. 98 Defensive end. He finished his collegiate career at Eastern Michigan and subsequently drafted by the Raiders in the fourth round of the 2019 NFL Draft.

A native of Rochester, Michigan, Maxx Crosby was born on August 22, 1997, under the star sign Leo. The twenty-two years old holds an American nationality and is of white ethnic background.

He is the 30th best player of the Oakland Raiders of 2019 season where Derek Carr, Rodney Hudson, and Tyrell Williams hit the 1st, 2nd, and 3rd position respectively.

Besides, four years stint with The Eastern Michigan Eagles football team has also helped him to earn a decent sum. As of 2020, his net worth is approximately $1 million.

Aspiring NFL star, Maxx Crosby is a secret loving person. The hunk has shared less to no information about his love life, not even his relatioship status. Thus, he is believed to be possibly single. 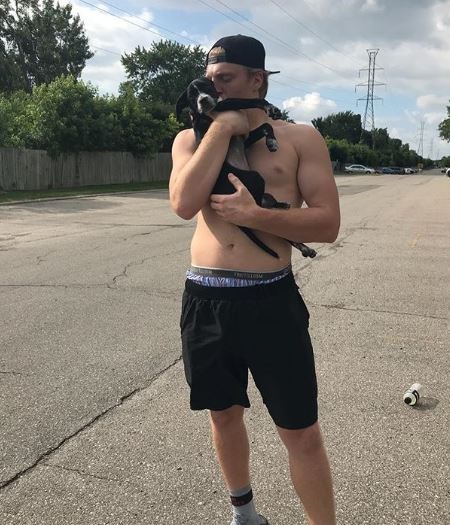 Besides, No. 98 – Oakland Raiders Defensive end is a dog lover. He often posts adorable pictures with his dogs: American Staffordshire Terrier and Miniature Pinscher.

Maxx was born to parents: Bryan and Vera Crosby. He grew up alongside his elder brother, Myles Crosby in the Detroit and Flint area until he was 11 years old.

His father played at Albion College in Michigan and brother played at Southern Methodist for two seasons before taking up a career in modeling.

After graduation from Colleyville Heritage High School, he enrolled at  Eastern Michigan University where he majored in communications.

In the 2009 NFL Draft, Maxx Crosby was picked by the Oakland Raiders in the fourth round (106th overall). In week 1, he made his debut against the Denver Broncos. Further, he recorded his first career sack on Chase Daniel in week five against Chicago Bears in the 24-21 victory.

In week 11, Crosby earned AFC Defensive Player of the Week after he sacked Ryan Finley four times, one of which was a strip-sack that was recovered by teammate Maurice Hurst Jr. in the 17–10 win, against the Cincinnati Bengals.