Max Kruse is a well-known German professional football player. He has been playing in the professional league for more than fifteen years. Kruse plays for the Union Berlin at the Bundesliga as a Forward. Max wears a No.10 jersey while playing for the club and country.

Max Kruse was born Max Bennet Kruse on March 19, 1988, in Reinbek, West Germany. He is the son of Frank Kruse and his wife. Max has a sister named Pia. Kruse is yet to share his academic and education qualifications. Talking about his physical appearance, Max stands five feet and eleven inches tall and weighs 70 kg.

Max Kruse has an estimated net worth of more than $5 Million. He has earned most of his net worth through his football career. However, Kruse has been playing professionally for a long time but has not become successful economically. As per sources, Max has an annual salary of €975,000 with Union Berlin. 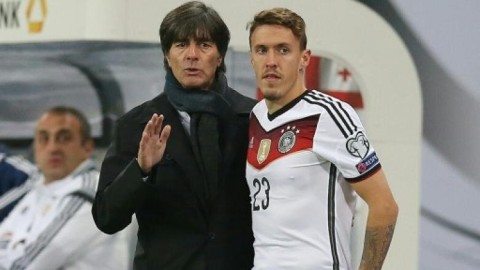 In 2020, Max terminated his contract with Fenerbahce citing unpaid wages. He chose to play in the Bundesliga, rejecting numerous offers from America. Kruse must be making a good amount from his salary with the national team of Germany.

Max is engaged to his longtime girlfriend, Dilara Mardine. After Germany’s 3-2 victory over Saudi Arabia in the Tokyo Olympics, Kruse shared his feelings and proposed to her on live TV. They had been dating each other for some time before their engagement.

Although This may be the first official relationship of Dilara, her fiance Max has a son named Lauro Maxim Kruse from his first unsuccessful relationship with Linda. Much about his past love life is under the radar.

Max started training for the youth team of TSV Reinbek from the age of four. He spent his six seasons with the club and then moved to SC Vier- and Marschlande. Kruse remained with the club until 2005 and signed with Werder Bremen in the Bundesliga. In 2006, The football player made his senior team debut for the Werder Bremen II. The following season, He was part of the Werder Bremen team.

In the next three seasons, Max appeared in sixty-nine games and scored seven goals for the team. In 2009, He moved to FC St. Pauli and signed a two-year contract with the club. He played in ninety-six games and scored twenty-two goals for the team. In early 2013, The player moved to SC Freiburg for a season. Max had a decent season scoring eleven goals in thirty-three matches.

Borussia Monchengladbach signed him for two seasons in 2013 and then moved to VfL Wolfburgs for two seasons. In 2016, He moved back to his childhood club, Bremen, and remained with the club until 2018 before moving to Fenerbahce. In late 2020, Kruse joined Union Berlin and has been with the club.

Max has represented the German national team in numerous divisions. He has fourteen international appearances for the team and scored four goals. Kruse played in three games in the 2021 Tokyo Olympics.