If you love watching football then, Borna Sosa must not be a new name. Borna is a rising Croatian professional football player. Sosa currently plays in the German football league, Bundesliga for the VfB Stuttgart. Borna plays as a left-back and left-wing-back, representing his club and country.

Borna Sosa was born on January 21, 1998, in Zagreb, Croatia. He is the son of Goran Sosa and his wife, Vesna Sosa. He has successfully kept his early life and parents under the radar. Sosa was born to Herzegovinian Croat parents from Gradac near Posusje. Borna stands six feet and two inches tall and weighs 77 kg.

Borna Sosa has an estimated net worth of more than $5 Million. A football player earns a huge sum from his contract with the club and makes a handsome amount through their sponsorship and advertising deals. As per sources, Sosa has an annual salary of £780,000. He joined the club in 2018 and signed a five-year contract worth £4 Million. 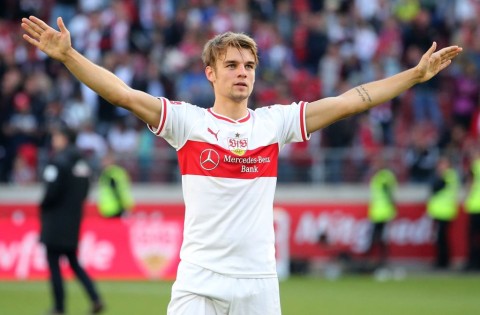 In November 2020, Borna extended his contract until 2025. Several changes were made after the contract, but much about it is under the radar. Sosa has a market value of more than £15 Million. He is very early in his career and will add a huge sum to his net worth in the coming days. Many big clubs are keeping a close eye on him.

Who is Borna Sosa Dating? Know About His Girlfriend and Relationship Status

Borna is an active social media user. He keeps sharing a lot of pictures on his social media account. The Croatian football player is believed to be single as of 2021. His timeline is filled with photos of games and training. Borna is very early in his career and must focus on his career rather than spending time with people.

Sosa could secretly be dating someone privately and waiting for the right time to open about his relationship status.

Borna started training with the youth team of Dinamo Zagreb, a hometown club, from the age of seven. He was part of the club until 2015 and made his professional debut in a 2–0 home win over Zagreb. While representing the club at the senior level, Sosa also played for the Dinamo Zagreb II team. In the next three seasons, Borna appeared in forty games and established himself among the top players.

Borna signed a five-year contract with VfB Stuttgart. He made his Bundesliga debut in August 2018. The following season, the team got relegated to decision One. They had a good season and made a comeback to Bundesliga. Sosa finished the 2020 season with nine assists on his account. Numerous sources praised and compared him to David Beckham, whom he named his football role model alongside David Alaba.

In 2020, The player extended his contract until 2025. Sosa has represented Croatia at the senior level in 2021. He has played for numerous divisions for his international team from U14 until U21.