Cal Haladay is a rising American college football player. He is currently playing in the Big Ten Conference for Michigan State University. Cal plays as a left-back for his university team. Haladay was named to the honorable mention All-Big Ten by the media and coaches and earned the Maxwell Football Club Shaun Alexander Freshman of the Year Award Watch List.

Cal Haladay was born on December 16, 2000, in Elysburg, Pennsylvania. He is the son of Greg Haladay and his wife, Noreen Haladay. After graduating from Southern Columbia High School, Haladay enrolled at Michigan State University. Talking about his physical appearance, Cal stands six feet and one inch tall and weighs 110 kg.

Cal started playing American football in his early days and his parents in their backyard. The multi-talented athlete played numerous sports while playing for his middle school. He chose to play American football in High School. In his freshman year of High School, Cal set a school single-season record with 151 tackles as Southern Columbia reached the state championship game. In his sophomore year, Haladay had 109 tackles. 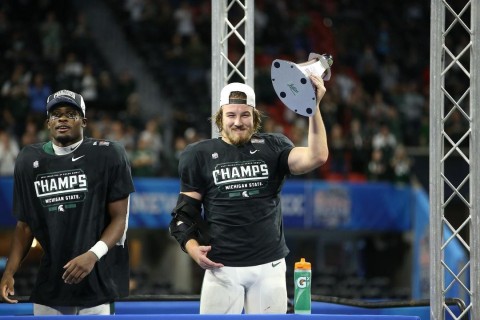 In his junior year, Cal was a member of the 2018 state championship team and was a first-team Class 2A all-state selection after recording 131 tackles. In his senior year, The player helped Southern Columbia to a perfect 16-0 record and the PIAA Class 2A state championship, the 10th state title in school history and third consecutive championship for the Tigers. He finished High School as one of the best inside linebackers in Pennsylvania.

Cal received numerous offers from universities and committed to playing for Michigan State University. Haladay played four games in his redshirt season. In his freshman year, The player played in sixteen games and started eleven games. He had a splendid season and was named to the Maxwell Football Club Shaun Alexander Freshman of the Year Award Watch List. He will be listing him for the NFL draft in the upcoming 2024 draft and will be among the top prospects.

The twenty-one-year-old American football player has successfully kept his personal life away from the reach of the media. There is no word about his relationship status in public. Cal is believed to be single as of early 2022. His social media is filled with photos of his games, training and friends. Haladay is very early in his career and must focus on his career rather than spending time with people.

Cal is yet to start his professional career. NCAA bans its universities in paying their athletes for them to represent their universities. Also, Haladay has not signed a major deal with any franchise or agency. Universities offer their players scholarships that help them cover most of their expenses. Cal is among the best-prospect for the upcoming drafts. He will be signing a huge contract in the future.