Omaha, Nebraska native, Mark Pope was born on 11th September 1972, under the star sign Virgo. The forty-eight-year-old holds an American nationality and is of white ethnic background. He grew up with faithful Latter-day Saint parents and had three older brothers.

How Much Is Mark Pope's Net Worth In 2021? Salary & Contract Details

A night before the 2020-2021 season opener, Mark Pope signed an extension contract which would through the 2026-27 season. Both the parties are yet to reveal the financial details such as base salary, incentives, and bonus.

While at Utah Valley University, he earned a salary of $1.275 million over the course of his new six-year contract. Hence, Pope is likely to make double his previous pay.

Salary As A NBA Player

Mark Pope's net worth is approximately $4 million as of 2021.

Mark Pope is married to Lee Anne for a long time now and shares four daughters: Ella, Avery, Layla, and Shay. She is the daughter of former University of Utah head basketball coach Lynn Archibald. (He later was an assistant coach at BYU). 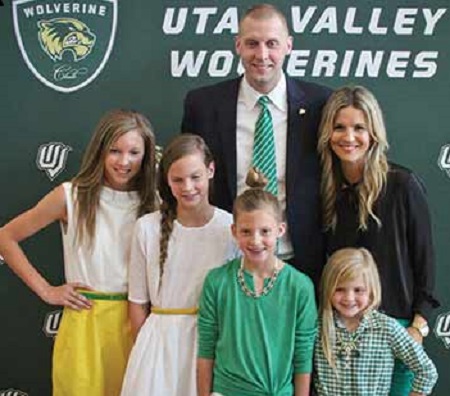 The couple met while Mark was playing for the New York Knicks and Lee, living in New York City/ At that time, she was giving her time to another, non-Kentucky letterman: David Letterman. Anne’s brother Damon had met Mark at a pro camp and introduced them.

After moving to New York City as part of a BYU summer internship program, Lee was appointed by ESPN and moved east. She took the full-time for Letterman until she married Mark and relocated to Indianapolis while he was playing for the Indiana Pacers.

Mark Pope started his coaching career in 2009 in Georgia. The following season, he arrived at Wake Forest as an assistant and then to BYU from 2011 to 2015. In 2011, Pope was hired as the new head coach of the Utah Valley. Since 2019, he is serving at BYU.