Collegiate player turned coach, Brad Stevens is one of the finest coaches in the National Basketball Association (NBA), who currently holds the position of the head coach Boston Celtics. Earlier, he remained the head coach at Butler University.

Zionsville, Indiana native, Brad Stevens was born on 22nd October 1976, under the star sign Libra. The forty-four-year-old is an American nationality and comes from a white ethnic background. Regarding his physique, he stands 6 ft 1 in (1.85 m) tall.

Two decades into coaching has earned Brad Stevens name, fame, and unquestionably an enormous fortune. The 2017 NBA All-Star Game head coach has an estimated net worth of $10 million as of 2021. Started in 2001 as an assistant coach at Bulter University, he earned a little less during his initial phase but had an increase in pay with his promotion to the position of head coach in 2007.

In 2013, he was hired by the Boston Celtics as their head coach. Contract with Boston Celtics features a six-year, $22-million-dollar deal. His annual salary is $3,666,667.

Currently, Brad owns a million-dollar house in Boston, Massachusetts. Earlier, he lived in Carmel, Indiana. In 2013, he sold the house.

Brad Steven is married to his long-time girlfriend, Tracy Wilhelmy Stevens. The duo met at DePauw University and inseparable since. Both graduated in 1999. After dating for years, the couple finally tied the knot in August 2003. They share two children: a son Brady and a daughter Kinsley. 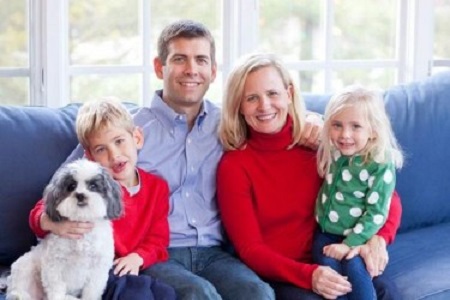 About his wife, Tracy was born on the 7th of October 1976 to Mary Kay and Albert Wilhelmy. Currently, she is a labor and employment lawyer, and also serves as Stevens' agent.

The NBA power couple is involved are involved with the American Cancer Society's Coaches Vs. Cancer.  Brad said the cause really hit home for them after Tracy's mother died in June 2004, because of the disease.

Steven is the son of Mark, an orthopedic surgeon in Indianapolis who played college football for Indiana. While, his mother, Jan, is a university professor who also had a stint at Butler. Growing up in Zionsville, Indiana, he developed his love for basketball. Starting at age five, he watches taped basketball games "before he went to afternoon kindergarten".

He finished high school at the Zionsville Community High School, where he played basketball. Further, he played for DePauw University. After quitting a job at Eli Lilly and Company, he joined the basketball program at Butler University as Volunteer before the 2000-01 season and was then promoted to full-time assistant coach and Head Coach.