Mariya Agapova is a Kazakhstani mixed martial artist who is currently signed to the Ultimate Fighting Championship and competes in the flyweight division. Earlier, she fought for several promotions including Invicta FC. Her MMA record is 9-1 and is 1-0 in the UFC.

Mariya Agapova made her UFC debut in June 2020 against Hannah Cifers and submitted her in the first round. Currently, she is preparing for her second bout at UFC against Shana Dobson scheduled for August 22, 2020, at UFC on ESPN 15. We have prepared her biography ahead of her Octagon return, check out to know about her childhood, family, relationship, salary, and more.

Mariya's only bout in the UFC was at UFC on ESPN: Eye vs. Calvillo in June against Hannah Cifers which che won via submission and earned $70,000 including $10,000 to show, $10,000 to win plus $50,000 for “Performance of the Night.” Besides, she has earned thousands of dollars for her fights in other promotions.

The UFC fighter is just 23 years old and is unmarried. She is at the peak of her MMA career and is training to become a better fighter in the UFC. She is possibly single currently as she hasn't disclosed her relationship and boyfriend. However, she has shared photos with a man named Joshua Smith who she calls her friend. 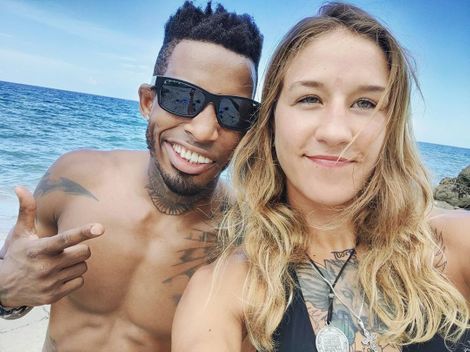 Mariya Agapova with her friend on the beach SOURCE: [email protected]

Joshua is also an MMA fighter like her and also trains with American Top Team like her.

Mariya and Joshua train MMA together and also spend time together. They even went together on a beach and she shared the images on her Instagram.

Mariya Agapova was born on April 7, 1997, in Pavlodar, Kazakhstan. She is 23 years old as of 2020. She began training kickboxing at 9 years old. Her father passed away shed she was 11 years old. She even competed in amateur boxing for 7 years.