Marius Wolf is a rising German professional football player. He is currently playing in the German football league, Bundesliga for Borussia Dortmund. Wolf has been playing at the professional level since 2014 with 1860 Munich. Wolf currently plays as a Midfielder for his club and country.

Marius Wolf was born on May 27, 1995, in Kronach, Germany. He rose to fame through his successful career and has not shared much about his early life and parents. Information about his education and academic qualification is still under the radar. Talking about his physical appearance, Marius stands six feet and two inches tall and weighs 81 kg.

Marius Wolf's Salary and Net Worth in Millions

Marius Wolf has an estimated net worth of more than $4 Million. He has earned most of his net worth through his football career and sponsorship and advertising deals. Wolf has a base salary of £2,912,000 with Dortmund. Last year, His annual wage was £3,120,000, including his signing bonus. 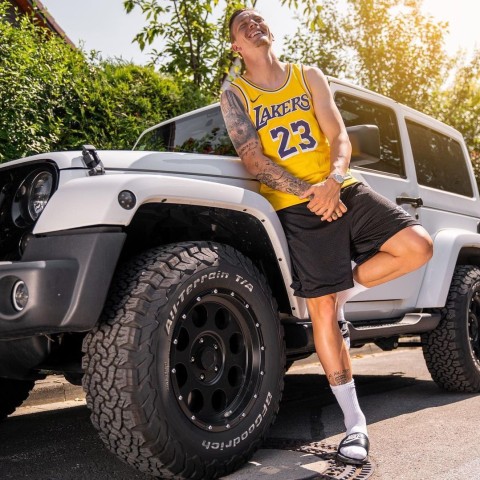 Wolf earned £4,420,000 as his salary in his first year with Borussia Dortmund. He signed a contract until 2023 and will be making millions in the future.

Marius is an active social media user. He keeps sharing numerous photos of his games, training, family, and friends. The German football player seems to be single as of early 2022. There is no rumor of him dating anyone in public. Wolf is very early in his career and must be focusing on his career. He could secretly be dating someone and waiting for the right time to open up about his relationship status with the public.

Marius started training with VfB Eisenberg's youth team in 1998. He remained with the club until 2004 and then moved to JFG Rodental. In 2008, The player moved to Fc Nurnberg and then to 1860 Munich in 2012. He represented the club in numerous divisions and made his senior team debut in 2014. In the next two years, Wolf appeared in ten games for Munich II and thirty-nine games for the senior team.

In 2016, Marius moved to Hannover 96 and had a mild season. He was loaned to Frankfurt for a season in 2017/18. In May 2018, The player joined Borussia Dortmund on a five-year deal for a reported fee of €5 million. After appearing for a season, He was loaned to Hertha BSC in the 2019/20 season and again loaned to FC Koln in the 2020/21 season. Wolf is currently playing along with  Haaland and Marco Reus

Marius was called for the Germany U20 team in 2015 and made his debut in the same year. However, He has not got a chance to represent the national team.