Marissa Steen was born on December 4, 1989, in Cincinnati, Ohio. She is the daughter of Tod Steen and his wife, Kathy Steen. Much about her parents is still under the radar. Steen graduated from Lakota West High School and enrolled at the University of Memphis. Marissa stands five feet and seven inches tall and weighs 55 kg.

Marissa Steen has an estimated net worth of more than $500,000. Although, It's been almost a decade of her professional career, it is yet to make a huge impact in her career. Steen has earned most of her net worth through her golf career. Marissa has a sponsorship deal with Ping, Prezi, Titleist, Second Guy, and a few more. 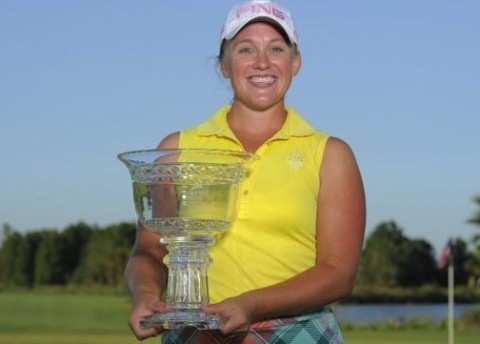 In the 2017 seasons, Steen crossed $100,000 earning when she made $91,233 and finished T10 at the LPGA Final Qualifying Tournament to earn Priority List Category 12 status for the 2018 LPGA Tour season. She had an injury in the following season and returned in 2019 and took home $89,416 as her prize money. Last season, Marissa played in just six LPGA events and earned $13,207. Totaling her prize money, The American golfer has made $401,364 from her LPGA career.

Who is Marissa Steen Dating? Know About Her Boyfriend and Relationship Status

Marissa is an active social media user. She keeps updating her followers with pictures of her games and family. Following her social media posts, It seems like Steen is single as of 2021. However, In a recent interview, Marissa opened about dating her boyfriend. However, The golf player is yet to share a word about her love life.

Marissa started her golf career at the age of fourteen at her High School. She won numerous amateur events before making her professional debut in 2012. Steen played golf for the University of Memphis and won USA Lady Jaguar Invitational, Chris Banister Golf Classic, and a few more. Marissa won the Ohio Junior Girls and competed twice in the U.S Women's Amateur.

Marissa made her LPGA debut in 2015 after finishing 1st on the Volvik Race for the Card money list to earn LPGA Tour membership for 2015. She is yet to register her first title win at the LPGA events. In early 2021, Steen finished T10 in AIG Women's Open.