Minjee Lee was born on May 27, 1996, in Perth, Western Australia. She is the daughter of Clara Lee and her husband, Soonam Lee. Lee holds Korean descent and has a younger brother Min Woo Lee, also a golfer. Talking about her physical appearance, Lee stands five feet and five inches tall and weighs 60 kg.

Minjee Lee has an estimated net worth of more than $5 Million. She has accumulated most of her net worth through her successful career in golf. Although, Minjee is very much early in her career and will be adding much to her net worth. Lee has a sponsorship deal with numerous brands like Hana Financial Group, Ecco, Srixon, ISPS, WAAC, and a few more. 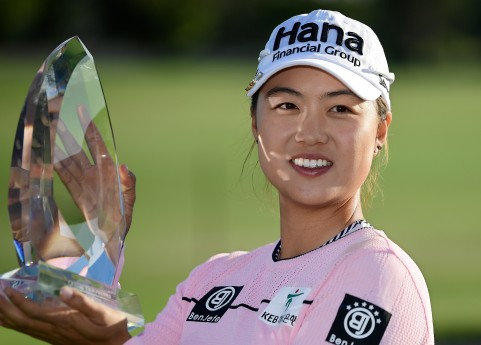 Minjee shares a photo with her LPGA title in 2019 SOURCE: LPGA

Who is Minjee Lee Dating? Know About Her Boyfriend and Relationship Status

Minjee started playing golf from a very early age. She became the youngest winner of the WA Amateur Open at the age of nine. Lee won almost a dozen of amateur titles before turning professional in 2014. The Australian player became the number one ranked amateur golfer in February 2014. Minjee won her first LPGA title at the Lotte Championship in April 2016.

Lee was part of the 2016 Rio Olympics and finished seventh in the final. In April 2018, Minjee lost the final at the LPGA Mediheal Championship to Lydia Ko. She won the LPGA Volvik Championship in May 2018. She became the first woman to win the Greg Norman Medal for being the best Australian professional golfer on the world stage.

In 2019, Lee won the Hugel-Air Premia LA Open as her fifth LPGA title and won her latest and sixth title at the Amundi Evian Championship against Lee Jeong-Eun