Lindy was born on January 16, 1991, in Plantation, Florida. She is among the three children born to David Duncan and his wife. She has a younger sister named Casey. Her father introduced her to golf and worked as her swing coach in her initial days. She decided she wanted to play on the LPGA Tour soon after taking up golf at 9. After graduating from American Heritage High School, Duncan enrolled at Duke University and played there for the University team. Lindy stands five feet and six inches tall and weighs over 62 kgs.

Lindy Duncan has an estimated net worth of more than $1 Million. Lindy has become successful in accumulating most of her net worth to her successful career in golf. She must be earning a reasonable amount from her sponsors like ACC. Jaye Marie Green is another Florida best rising American professional golf player who shares a similar net worth to Lindy. 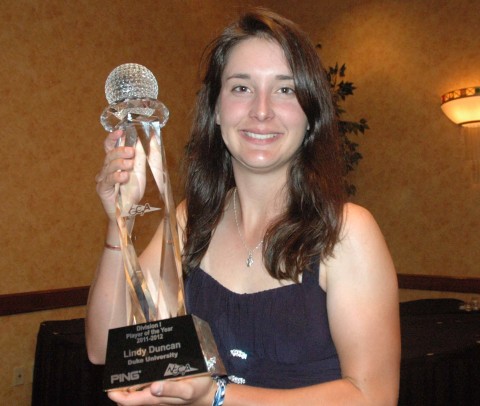 Duncan along with her NCCA award SOURCE: Duke Athletics

Lindy earned her first six-figure amount in 2016 worth $140,000 when she made cuts in fourteen events out of twenty-events. The same year, She recorded a career-best T11 finish at the LPGA Volvik Championship. The following season, Duncan earned $165,000 from twenty-one events. In 2018, The golf player took home $524,000 as her prize money after she made cuts in twenty-five events out of twenty-seven events played.

Unlike other golf players, Lindy is not active on social media and has left a huge gap between her personal life and her fans. Lindy's relationship status remains a mystery to the public. She could be involved in a secret and romantic relationship with her boyfriend or could be living a single happy life on her own.

Florida Native Lindy has been playing for almost two decades. She started training for golf at the age of nine with her father. Duncan was part of the 2012 U.S Curtis Cup Team. During her time at the Duke University, Lindy recorded six wins, was a four-time first-team All-American, and was named the 2012 NGCA Player of the Year. She turned professional in 2013 after graduating from the University.

Lindy made her professional debut on the Symetra Tour of 2013. She finished T15 at the 2015 Final LPGA Qualifying Tournament to earn LPGA membership for the 2016 season. In her LPGA rookie years, Duncan recorded a career-best T11 finish at the LPGA Volvik Championship. The following season, the golfer recorded the first two top-10 finishes of her career.

In 2018, Duncan became the runner-up at the Volunteers of America LPGA Texas Classic. She is trying to get back to her form as she could not play in many events last season due to the COVID pandemic.