Marissa Powell is a Miss Utah USA 2013 who has also been crowned 3rd runner-up at Miss USA. Over and above that, she got the spotlight as NFL WAGs. She is married to NFL star, Kyle Van Noy, a linebacker for the New England Patriots of the National Football League (NFL).

How do Marissa and Kyle Van Noy meet? When did they tie the knot? Do they have children?

Marissa Powell was born in May 1992. She holds an American nationality and is of white ethnic background.

While at high school, Marissa played volleyball and was awarded All-Region two years in a row and Deseret News First Team All-State 5A Defensive Specialist of the Year 2009. Further, he played collegiate volleyball for Westminster College in 2010 and later transferred to Brigham Young University. 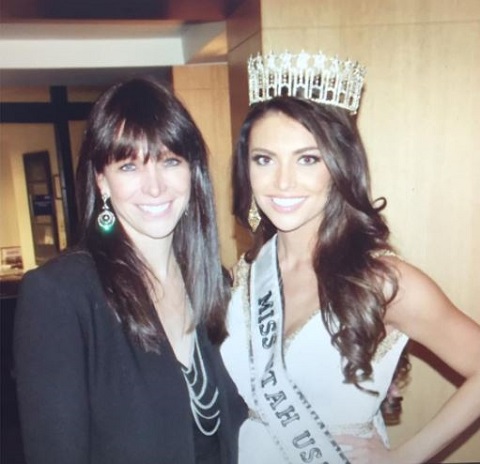 Marissa Powell and Kyle Van Noy met at Brigham Young University while Powell was already a popular model as well as an actress. On the other hand, Van Noy was a linebacker for BYU.   The couple began dating in 2011 however, their relationship was on-and-off.

In December 2013, Van Noy went down on his knee asking for a lifetime of commitment. Marissa said YES!! In the following years, the couple tied the knot.

In May 2019, Marissa and her husband announced having a baby. Marissa Powell with her husband and son SOURCE: Instagram @realmarissavannoy

Marissa and Kyle Van Noy are living a blissful marital life. They often flaunt their love life on their respective Instagram account.

Her Husband Is 2× Super Bowl champion

Kyle Van Noy, Henderson, Nevada native was born on 26th March 1991. He enrolled at McQueen High School and finished his college football playing for BYU. In the 2014 NFL Draft, he was picked by the Detroit Lions in round two with the 40th pick.

On 25th October 2016, he was traded to New England Patriots. With the team, he earned his first t Super Bowl victory of his career.

A model and actress, Marissa Powel have earned a decent sum throughout her career. Further, she is now into business which is extra income.

As of 2022, Marissa Powle shares a net worth of $20 million with her husband, Kyle Van Noy.