Mario Cristobal is a rising American football coach. Mario started his career as a football player and played in the National Football League for the Amsterdam Admirals. Cristobal played as an Offensive tackle for his team. Mario is currently working as the head football coach for the University of Oregon.

Mario Cristobal was born on September 24, 1970, in Miami, Florida. He is the son of Luis Cristobal and his wife, Clara Cristobal. His father was a political prisoner under the Castro regime. Mario holds American nationality and is of Cuban descent. Cristobal graduated from Christopher Columbus High School and enrolled at the University of Miami. Cristobal stands six feet and four inches tall and weighs 120 kg.

Mario Cristobal has an estimated net worth of more than $10 Million. He has earned most of his net worth through his time as a head coach. Mario has an annual salary of $5.5 Million, working as the head coach for Oregon. In December 2020, Cristobal signed a $27.3 million contract with Oregon. 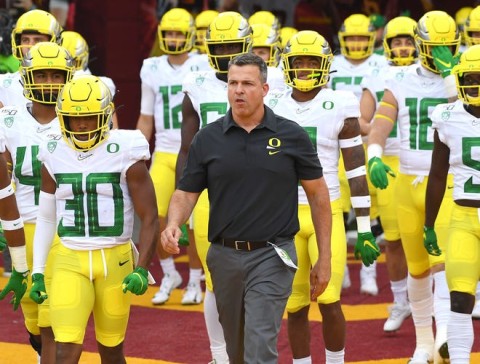 Mario can earn an additional year for $5 million more if the Ducks win nine regular-season games in any of the next three seasons. While working with the Crimson Tide, Cristobal made $475,000. Cristobal played in the NFL for a season and must have earned a handsome amount.

Cristobal is a married man living happy married life along with his wife and children. Mario walked down his wedding aisle along with Jessica Cristobal in June 2006. They had been dating for several years before tying their wedding knot. The duo had a private wedding ceremony in front of their close relatives and friends. Mario shares a photo with his wife and children SOURCE: [email protected]

Mario and Jessica are the proud parents of two children, Mario Mateo Cristobal and Rocco Cristobal. Mario is very close to his family and spends his free time with his family.

Mario started playing football from his High School days and got a scholarship to the University of Miami. Cristobal won two national championships (1989 and 1991), and in 1992, he earned First-Team All-Big East Conference as an offensive tackle. He signed as a free agent with Denver Broncos and played for the Amsterdam Admirals in the NFL Europe.

Mario served as a graduate assistant for the University of Miami. After spending two years with the team, He moved to Rutgers University as a Tight Ends and Offensive Line Coach. Cristobal later moved back to Miami offensive line coach under Larry Coker for three seasons from 2004 to 2006.

In 2007 Cristobal signed with Florida International University as their new head coach. He led the team into the Sun Belt Title and won the Sun Belt Coach of the Year. In 2013, The coach moved to the University of Alabama as assistant head coach, offensive line coach, and recruiting coordinator. In 2017, Mario moved to the University of Oregon and led the team to Pac-12 Championship and Pac-12 North Division. Cristobal won the Pac-12 Coach of the year award.