Bob Stoops is a well-known American football coach. He played football in his High School and University days. Stoops worked as the head coach and general manager for the Dallas Renegades of the XFL. Bob served as the Head Coach for Oklahoma from 1999 until 2016 and won ten Big-ten Championships.

Bob Stoops was born Robert Anthony Stoops on September 9, 1960, in Youngstown, Ohio. He is among the children born to Evelyn Stoops and her husband, Ron Stoops Sr. His father worked as a defensive coordinator for a High School. Bob graduated from Cardinal Mooney High Schoola and enrolled a the University of Iowa.

Bob Stoops has an estimated net worth of more than $10 Million. He was ranked among the highest-paid coach in the league for several years. In 2020, Stoops took home a whopping $1 Million as his salary working as the head coach and general manager. In 2019, He voluntarily took a pay decrease from the University of Oklahoma from $325,000 a year to $162,000. 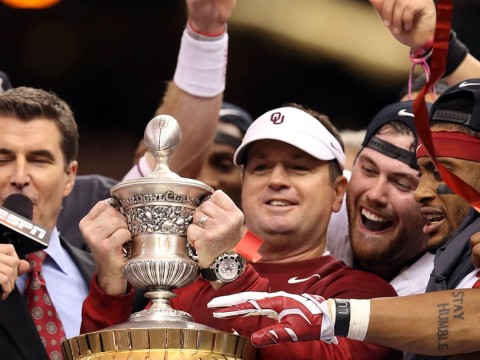 Bob earned millions as his salary from 2000 until leaving Oklahoma in 2016. His first-year salary was $625,000. His salary increased to $1.4 million the following season, leading the Oklahoma Sooners to their Big 12, National, and numerous other titles. In the next seasons, His salary went increasing by $100,000 annually.

Stoops earned an annual salary of $5.55 million until leaving Oklahoma in 2016. In 2019, Bob made his return to work as the head coach and signed with Dallas Renegades.

Bob has been married for more than three decades. Stoops got married to Carol Stoops. They had seen each other numerous years before tying their wedding knot. Carol works as a National Sales Director at Mary Kay. The couple is very much private about their personal life. Bob and Carol are the proud parents of three children, Mackenzie, Isaac, and Drake.

In 1999, the University of Oklahoma hired Bob as their new head coach. He led the team to the 2000 Big 12 Conference title, National Championship title, Big 12 South Division. Stoops won over half a dozen awards, including Ap Coach of the Year, Big 12 Coach of the year, etc. In his tenure of sixteen years, Bob led the team to ten Big 12 title championships, eight Big 12 South Division Championships.

Bob announced his retirement from coaching in June 2017 and got succeeded by Lincoln Riley. In 2019, He announced his comeback, joined Dallas Renegades as head coach/general manager, and served until April 2020. Stoops might be joining the USC trojans shortly.