Marin Pongracic is a rising Croatian professional football player. He is currently playing Bundesliga at the German Football League for Borussia Dortmund. Marin plays as a Central Defender for his club and country. Pongracic turned professional in 2016 with 1860 Munich II.

Marin Pongracic was born on September 11, 1997, in Landshut, Bavaria, Germany. He is the son of Stribor and Anelka. His parents escaped from their home in Slavonski Brod, Croatia, to Berlin, Germany. Talking about his physical appearance, Pongracic stands six feet three inches tall and weighs 95 kg.

Marin Pongracic has an estimated net worth of more than $3 Million. The player credits most of his net worth through his successful football career. Marin receives an annual salary of £1,924,000 with VfL Wolfsburg. He will receive the same amount of wages until 2024. 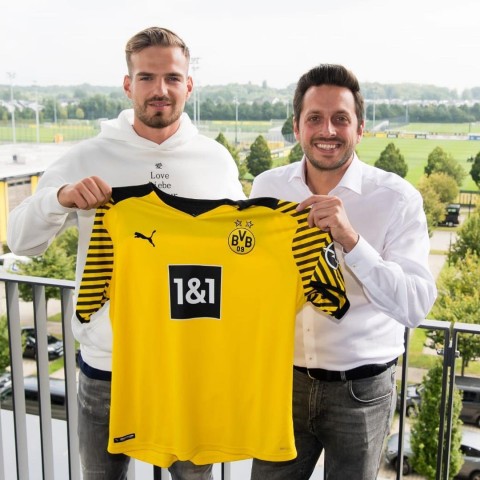 Marin played with Dortmund a season in 2021 SOURCE: [email protected]

Marin received an annual salary of £28,600 with Munchen Lions. His salary increased to £832,000 after signing with Fussballclub RB Salzburg in 2018. The player had a similar salary in the following season. In 2020, Pongracic joined VfL Wolfsburg on a four-and-a-half-year deal for a fee believed to be €10 million. Marin is very early in his career and will be making millions in the future.

Marin is an active social media user. He keeps sharing numerous photos in his timeline about his personal life and love life. Pongracic could be single, dating, or even engaged to his fiance. There is no rumor of the football player dating anyone in public. Marin likes to spend his free time with his family and friends.

Marin started his early days with the youth academy of Bayern Munich. The player trained with Bayern Munich until 2013 and then moved to FC Ingolstadt. He made 38 appearances at under-17 and under-19 levels before moving to 1860 Munich in 2016, searching for professional football. Pongracic made his senior team debut with 1860 in Bundesliga.

Marin has represented Croatia in the lower division and senior team. He made his international debut in 2017 with the Croatia U21 team and appeared in three games. In 2020, The player earned his senior team call and appeared in two games along with Luka Modric and Simon Sluga.