Margarita Gasparyan was born Margarita Melikovna Gasparyan on September 1, 1994, in Moscow, Russia. She is the daughter of Melik Gasparyan and his wife, Lyudmila. Her father worked as a weightlifter, and her mother was a biathlonist. Gasparyan did not continue her formal education. Margarita stands exactly six feet and weighs 65 kg.

Margarita Gasparyan's Net Worth In Millions

Margarita Gasparyan has an estimated net worth of more than $1.5 Million. She has earned most of her net worth through her decade-long career in tennis. She spends most of her time playing in the US Open. Margarita has earned $209,944 as her prize money in the ongoing season of 2021. The Russian tennis player has a clothing sponsorship deal with Fila. Also, She wears the Shoes of Fila and uses the racket of Wilson. Margarita is very much open about her relationship status. Gasparyan is married to her longtime boyfriend, Sergey Betova. The Love birds walked down their wedding aisle in July 2021 at a private wedding ceremony in their hometown. They had been seeing each other for some time before getting married. Her timeline is filled with photos of her games and her vacations. 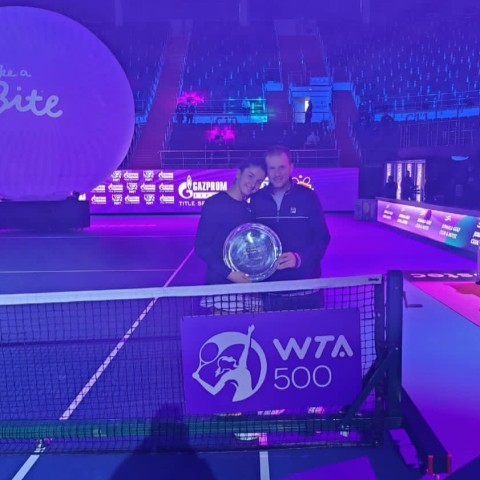 Margarita shares a photo with her husband after an event SOURCE: [email protected]

Nothing much about their first meeting experience is shared with the public. Sergey is also a tennis player. To date, they have maintained a healthy environment of not sharing with the public.

Tennis Career in ITF and WTA

Margarita started playing tennis at the age of five. She played in numerous junior academies before making her professional debut in 2010 at the $10k tournament in St. Petersburg. In 2012, The Russian player rose to fame after winning four singles titles on the ITF Circuit, all under $25k. Gasparyan struggled to gain international fame until 2014, broke the barrier, and made her Grand Slam main-draw debut at French Open in 2015.

Gasparyan finished the 2015 season, winning three ITF singles tournaments and two ITF doubles tournaments. She ended the season as world No. 62. In 2016, Margarita entered in Top 50 ranking and reached the Doubles semifinal in the French Open and lost. At the end of the season, The player underwent surgery and was out from the Summer Olympics. Since then, Gasparyan has been trying to make her come back but has not become successful.