Stefanie Vogele is a well-known Swiss professional tennis player. She has been playing at the professional level since 2006. Stefanie currently plays in the ITF and WTA Tour events globally. vogele has won eight ITF Single titles and five ITF Doubles Titles.

Stefanie Vogele was born on March 10, 1990, in Leuggern, Switzerland. She is the daughter of Bruno Vogele and his wife, Edith Vogele. Stefanie has three sisters. Her father passed away in 2014. Regarding her physical appearance, vogele stands five feet and seven inches tall and weighs 60 kg.

Stefanie Vogele has an estimated net worth of more than $2 Million. She credits most of her net worth to her successful career in tennis. A tennis player earns a handsome amount from their sponsorship and advertising deals. vogele has a clothing sponsorship deal with Bidi Badu. The player wears a Shoes Nike and uses the Racket of Yonex. 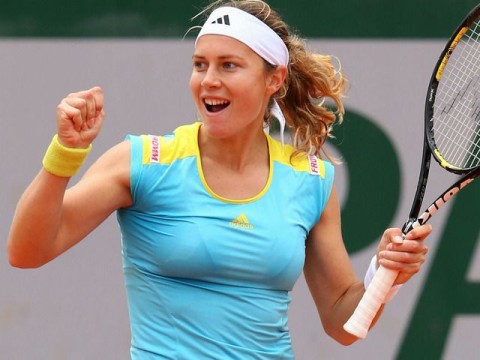 In the ongoing season of 2021, Stefanie has earned $234,661 as her prize money. She is very early in her career and will be making millions in the days to come. Totaling her prize money from tennis events, it sums to $2,854,447.

Stefanie is very concerned about keeping her personal life away from the spotlight. She has successfully kept her relationship status away from the public. The Swiss tennis player could be single, dating or even be married. Vogele does not show much presence on social media. Following her posts, it seems like Stefanie is single and living a single happy life. There has been no rumor of her dating anyone in public.

Stefanie's parents introduced her to tennis at the age of four. Ever since She has not looked back on her decision. Currently, the player works with her head coach Ivo Werner, a former professional tennis player originally from Czechoslovakia. Although she turned professional in 2006, she came to the spotlight in 2009 after seeding into Wimbledon and losing to Venus Williams. Stefanie also made it into the US Open but had a short experience.

Vogele started her 2010 season losing to Sania Mirza in the Auckland Open. In the next two seasons, She could not impact the game. Stefanie won two titles in the ITF Circuit finals. In the 2013 season, The Swiss player reached the pinnacle of her ranking. She played in the Shenzhen Open, Australian Open but could not make it to the rounds. Stefanie finished the year ranked at No. 44.

In the 2014 season, Vogele had a decent season and ended the year ranked 78. Since then, The player has had many ups and downs in her rankings. She continued to win titles in the ITF circuits but is yet to win a major event. Stefanie has been trying to make a good comeback in the last three seasons but has not succeeded.