Manuel Locatelli is an Italian professional footballer signed to Serie A side Sassuolo and the Italy national team as a midfielder. Earlier, he played for Milan (2016-2019).

How Much is Manuel Locatelli's Net Worth In 2021? Salary & Market Value

According to the source, he earned a six-digit figure until 2017, and after his salary is seen increasing to a seven-digit figure per annum. As of 2021, his net worth is estimated at $1 million.

Manuel Locatelli's Girlfriend: Is He Dating?

Manuel Locatelli is currently in a relationship with Thessa Lacovich. Lacovich, who is of Costa Rican origins, is working as a digital communication strategy at IED Milan. 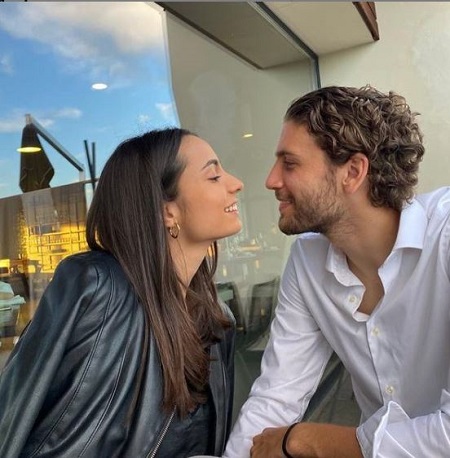 The two began dating in June 2017 and since features each other in their respecting account. They are not shy to flaunt love in public/media. Unlike other wags, she appears during the match to cheer up his man.

Locatelli started his career with Atalanta and moved to Milan after two year in 2009. After going through various youth system at Milan, he received his first ever call-up to Milan's senior team ahead of the away game against Udinese played on 22 September 2015.

For 2018-19 season, he was loaned out to Sassuolo, preferably without a buy-out option. In 2019, he signed to Sassuolo on permanent basis.

On 7th September 2020, he made his debut with the senior Italy squad, playing as a starter in the UEFA Nations League match won 1–0 against the Netherlands in Amsterdam. In June 2021, he was named in Italy's squad for UEFA Euro 2020. Leonardo Bonucci and Federico Bernardeschi are his national team mates.