Mana Martinez is a professional fighter who is recently signed by UFC to fight in the bantamweight division. He is currently affiliated with Metro Fight club based in his hometown, Texas.

Mana is nicknamed "Manaboi" with a current statistic ofo 8 wins in 10 matches. He has won all his 8 wins by knockout. He was set to make his debut in the UFC against Trevis but later canceled due to issues. Manaboi is currently ranked 12 of the 716 active bantamweight fighters in the US, second in Texas, and second in the US Southwest Pro Bantamweights.

Who is Manaboi? (Childhood and Family)

Mana Martinez was born on March 25, 1996, in Houston, Texas, United States. His stance is Orthodox and currently resides in Texas.

Martinez's father's name is Gil Martinez who is also his coach. His mother's name is Leona Martinez and celebrates her birthday on July 8. He always shows his appreciation towards his parents on his Instagram. 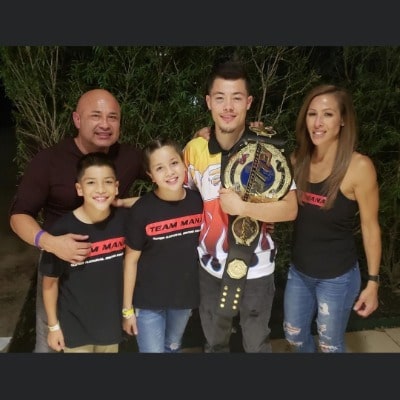 He has two younger siblings, brother Kai and sister Malia. At a young age, Kai and Malia are also involved in the fighting. In fact, Kai is a talented grappling fighter.

Mana has a height of 5 feet 10 inches and currently weighs around 62 kg making him fight in the bantamweight division.

He has a reach of 1.78 meters which he utilizes perfectly in knocking the opponent with his effective punches.

Net worth and Career earnings; How much does he earn from UFC?

The net worth of Mana Martinez is estimated to be $120,000. However, he has not opened about his earnings in media. His most income comes from fighting in different competitions and deals with brands.

Recently, Martinez has signed a contract with MMA meaning that his earnings are increasing more. However, he has not been able to make his Octagon debut.

So, how much will Mana Martinez earn per fight in the UFC? According to sources, the range of UFC fighter's salaries can range from thousands to millions per fight. In 2018, only 33% of MMA fighters made six figures.

Being a beginner fighter in MMA, Mana Martinez can possibly earn around $30,000 per fight in the UFC. And a fighter normally does 3 matches in a year. So, he can possibly earn up to 100,000 per year by fighting. It does not include sponsorships and bonuses.

Mana Martinez is very successful in keeping his personal life away from social media and the public. He has never shared a photo or moment with any girls in the public. However, he frequently shares photos of his loved ones and family on his Instagram.

Or it may be that Matinez is currently single. As of August 2021, he is just 25 years old who has just signed a contract with UFC. So he is currently focused on his career rather than having fun with girls.

Earlier Manaboi was set to fight against Trevis Jones and before that, with Jesse Strader. But due to disclosed reasons, he did not get a chance to make his Octagon debut. Mana Martinez's last fight was against Jose Johnson on May 16. He won the fight with a knockout by a punch in Round 1.