Do you enjoy watching basketball? If yes, then you might recognize Dirk Nowitzki who is a German retired professional basketball player. He played his entire 21 years in National Basketball Association (NBA) for Dallas Mavericks.

So today's article is about Malaika Nowitzki who is the only daughter of Drik Nowitzki. Malaika's father is widely regarded as one of the greatest power forwards of all time and he is considered by many to be the greatest European player of all time. He is the first Maverick voted onto an All-NBA Team and holds several all-time Mavericks franchise records.

Malaika was born in July 2013 to mother Jessica Olsson and father Drik Nowitzki. Malaika belongs to mixed ethnicity as her father is a native of Germany while her mother belongs to Kenyan descent.

After two years, Malaika's brother Max Nowitzki was born in 2014 and in 2016 she was blessed with second brother Morris Nowitzki. The kids are being raised in a trilingual household, as they’re being taught to speak English, German, and Swedish.

Malaika with her parents and siblings SOURCE: Dallas Morning News

Malika and her brothers were kept away from the spotlight for the first few years of their lives. However, they were pictured with their mom on a few of Nowitzki’s last games before his official retirement last April. Apart from that their parents wanted Malaika and her brothers to be exposed to different cultures, "So they can grow up with an open mind," Malaika's mom said. "And through their experiences and our guidance, they will become their own individuals."

The kids were also exposed to the euphoria their dad caused in Maverick’s avid fans, but the couple admits they’re not sure the little ones fully understand that the roaring and clapping was for their dad, as Malaika's mom explained to the Dallas News:

“When they go to games and see their dad play, it's exciting for a while. And then we need to get some popcorn to keep them busy. But Max, he can watch an entire game. He's really into it."

Malaika's dad Dirk and mom Jessica belong to the different races. Her parents' marriage became a hot topic after they appeared together at the ESPYS, which is an award ceremony for a sportsperson. At the time, Olsson sparked a lot of interest when Nowitzki kissed her in front of the cameras after receiving an award at the event.

Immediately, fans and fellow athletes alike took to social media to express their shock at watching Maverick’s resident German with a woman of color. 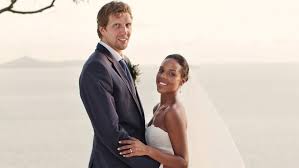 Malaika's parents' color has never been an issue. For the former NBA star, growing up in Germany, and playing basketball with kids of all races helped him look past every race misconception. Even Malaika 's father Drik said,'' Color or race for me never really mattered, and that’s also the beauty of sports,” he said. “You’re a team. Same with marriage. You’re a team and pulling on the same string. You try to make it work, and chemistry has got to be there. That is just the way I was raised.''

As we all know that Malaika is just a little girl as of now she must be studying and enjoying her childhood with her brothers. Being a daughter of a rich sportsman there is no doubt Malaika lives a lavish life.

As of 2020, Dirk Nowitzki's net worth is estimated to be $140 million dollars, making him the 13th richest NBA players on the list. The family lives in the house worth $8 million dollars in the Billionaire’s Row in Dallas neighborhood.

Irrespective of Dirks's limelight, Malaika's mom is doing amazing in her career. The artsy lady is a prominent name in her field and is making a good sum of money. However, with due respect, it is nowhere as close to what her husband makes. Dirk is a forward for the Dallas Mavericks and has made a huge fortune throughout his career.