Luis Robert is a well-known Cuban professional baseball player. Many know him as the LeBron James of baseball in terms of his lookalike facial structure. Luis has been playing in the MLB for the Chicago White Sox since 2020. Robert was part of the Bronze Medal Winning team in 2013 at U-18 Baseball World Cup.

Luis Robert was born Luis Robert Moiran on August 2, 1997, in Guantanamo, Cuba. He is the son of Miguelina Moiran Centeno and her husband, Luis Robert Robles. Much about his parent is still under the radar. Robert has not shared a word about his education and academic qualification. Robert stands six feet and two inches tall and weighs 84 kg. 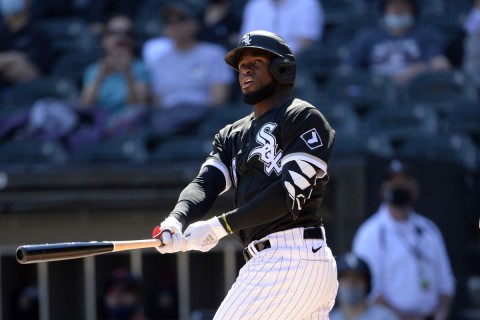 Luis plays in the MLB for the Chicago White Sox SOURCE: DraftKing

As per the contract, Luis took home a $1.5 million salary in 2020 and $3.5 Million in 2021. His salary will increase to $6 Million for the next season and then increase by $3 Million yearly. Robert’s two options come with a price tag of $20 million apiece, with the White Sox also holding a $2 million buyout on both options.

Who is Luis Robert Dating? Know About His Girlfriend and Relationship Status

Luis is very much private about his love life. He has not shared a word about his relationship status. Robert is an active social media user, and following his posts, it seems like Luis is single as of 2021. The player is very early in his career and could focus on his career rather than spending time with people. Robert is very close to his family and friends and spends his free time with them.

In late 2016, Chicago White Sox spotted him and signed a contract in May 2017, which included a signing bonus of $26 Million. Robert spent his next two seasons playing in the Minor League baseball for Winston_Salem Dash. In the 2019 season, Luis scored 108 runs, the second-most in the minor leagues, and he led the minors with 165 hits. In January 2020, The player extended his contract until 2026 for $50 Million.

Luis won the Golf Glove Award for the center field after having a good season in 2020. In early 2021, He had to move out of the game after suffering a tea off right hip flexor.