Ozzie Ablies is a well-known Curacaoan professional baseball player. He is currently playing in Major League Baseball for the Atlanta Braves. Albies plays as a second baseman for his team. Ozzie won the Silver Slugger Award in 2019 and was named into the All-Star Team in 2018 and 2021.

Ozzie Albies was born Ozhaino Jurdy Jiandro "Ozzie" Albies on January 7, 1997, in Willemstad, Curacao. He is among the three children born to Osgarry Albies and his wife, Judari Albies. His father passed away in 2013 due to a heart attack. Ozzie has a younger brother, Zhhihir, and a sister, Jeanalyn. Albies stands five feet and eight inches tall and weighs 74 kg.

Ozzie Albies has an estimated net worth of more than $5 Million. He has earned most of his net worth through his short career in the MLB. Albies is very early in his career and will add more to his net worth in the future. Ozzie has an annual salary of $5,000,000 with the Braves. Ozzie looks to the ball after striking in a game SOURCE: Time Free Press

In April 2019, Ozzie and the Braves signed a $35 million, seven-year contract, including a pair of team options that could make it worth $45 million for nine seasons. His salary will increase by $2 Million each other from the contract year until 2026. The Braves have a $7 million option for 2027 with no buyout. He is among the highest-earning player on the team. In his five seasons with the team, Ozzie has made $5,456,596 as his salary and earnings.

Who is Ozzie Albies's Girlfriend? Know About His Girlfriend and Relationship Status

Albies is an active social media user and very much open about his relationship status. Ozzie is dating his longtime girlfriend named Brazilian Miss. None of them have shared her actual name. Some rumors suggest it to be her real name. Following their posts, We can be sure that They have been dating officially since July 2018. 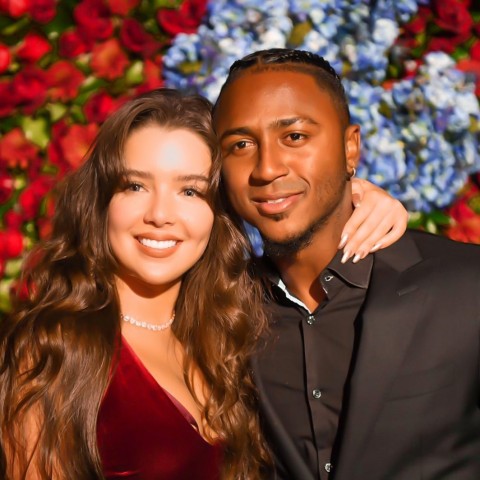 Ozzie attends an event along with his girlfriend SOURCE: [email protected]

Miss is very supportive of Albies and keeps attending his game regularly. Both of them keep sharing each other's photos regularly. Although It's been more than three years of their formal relationship, the pair is yet to get engaged or tie their wedding knot.

Albies credits his father as his inspiration for baseball. He hit the ball for the first time when Ozzie was six years old. In July 2013, the Braves signed him as an international free agent for $350,000. The following year, Albies made his professional debut at the Gulf Coast Braves for the Danville Braves. In 2015, He was the youngest player on the field and was later named to the All-Star Futures Game.