Luana Carolina is a Brazillian Mixed Martial Arts (MMA) fighter competing in the Flyweight division of the Ultimate Fighting Championship (UFC). Turned professional in 2015, her pro-MMA record as of May 2021 entails 6 wins and 2 losses.

The fighting committees are yet to disclose Carolina's fight purses. As such the 27-year old's net worth is still a matter of suppositions. That said, she has been on eight fights to date. This MMA fights payscale usually starts from as low as $10,000 mostly in the form of a show purse. Each of the fighters, winner and the loser is guaranteed to receive for showing up and entitled to a winning amount on top. 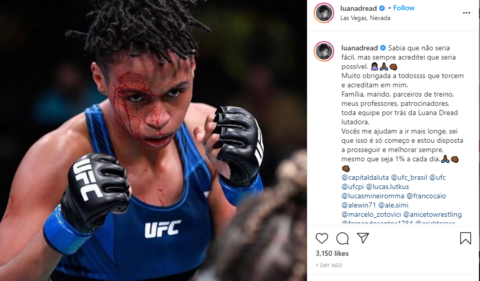 Luana Carolina won the fight against Poliana Botelho on May 1, 2021 via split decision. SOURCE: Instagram

Some UFC events also facilitate the fighters with a fraction of pay-per-view money, performance bonuses, winning bonuses, and so forth. Sources suggest the current minimum per fight for even the relatively unknown fighters like Carolina is around $10,000 to fight and an additional $10,000+ to win.

Assessing all that, Luana Carolina's net worth could be anywhere betwixt $150,000 to $200,000. In addition, she is also endorsed by brands like Nutrata, NS Formula, and a fighting gear company, Pretorian Hard -- all one way or the other, adding to her soaring fortune.

Who is Luana Carolina Married To?

Luana Carolina is married to a fellow MMA fighter, Rafael Da Silva Cordeiro who has a pro-MMA record of 8 wins and 4 losses (May 2021). Allegedly, the couple has known each other since 2011. 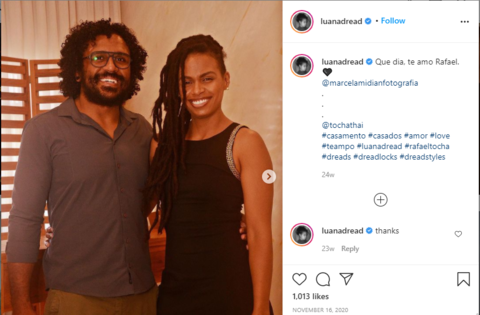 While Carolina was frequent on Rafael's Instagram ever since the duo met, it wasn't until October 1, 2018, when Rafael first addressed the former as his girlfriend. Of the many hashtags that the fighter added in the post, one that caught the fans' attention was "#mygirlfriend". This was noted in many other pictures of the couple that followed. The pair had their wedding in November 2020.

Carolina went on to lose her pro career debut match against Daiane Firmino on January 24, 2015. Five months later, she got her first victory in a bout against Isabela de Pádua at Casa Branca MMA. At Thunder Fight 5 on September 19, she defeated Ana Merlin by a technical knockout in round 1. This was followed by another victory on July 9, 2016, against Jessica Negräo.

She next upset Mary Ellen Sato by a unanimous decision at Thunder Fight 12 on September 29, 2017. Carolina's next triumph was over Mabelly Lima (decision unanimous) at DW's Contender Series on August 8, 2018.

Carolina made her UFC debut on May 5, 2019 at UFC 237: Namajunas vs Andrade feuding against Priscila Cachoeira. The Brazilian won the fight via undivided vote. She faced her second career defeat at the hands of Ariane Lipski at UFC Fight Night on July 18, 2020. She tapped to Lipski's kneebar at 1:28 of round 1.

On May 1, 2021, at UFC Fight Night: Reyes vs Prochazka, Carolina defeated Poliana Botelho, also a Brazilian by a split decision after the bout ended at 5:00 of round 3.