Liam Alan Millar, the Swiss Super League football Club Basel defender, is from Canada. As a winger, the Canadian international is serving his current squad. What is more, he also plays for the Canadian national team. He is one of the most known and sensational soccer players in Canada. In March 2019, he made his international debut for Canada against New Zealand.

Regarding his professional football career, Basel winger Liam Millar has already played for Liverpool, Kilmarnock, and Charlton Athletic in his early years. However, he enrolled in Brampton Youth SC academy in 2003. He was very talented and fond of soccer, so he moved to England for a better footballing career. The professional made it to Liverpool's first team in 2019 but did not play a single game. Instead, he was loaned to Kilmarnock in 2021, and from there, he joined Charlton Athletic on loan. Recording two goals in 27 matches, he moved to FC Basel on July 8, 2021.

Former Liverpool Star Liam Millar is a Canadian-based footballer born on September 27, 1999, in Toronto, Ontario, Canada. He spent his boyhood days in Brampton and Oakville, although he was born in  Toronto. He is a rising footballer at age 23, and his zodiac sign is Libra. Besides football, Liam also likes exploring new destinations and playing play station. The both-footed player Liam is 5 ft 11 inches and weighs over 72kg.

Liam came from a footballing background. Not only his father, Alan Millar, but his grandfather Malcolm Millar was also a professional football player. Having such an influenced background, he also thought of becoming a pro footballer at an ealry age. Moreover, his father is also an electrician for the popular television series Games of Thrones. Besides, we are unknown of his mother's and siblings' names.

What's his Marital Status? Know About His Love Life

Liam Millar was happily engaged in January 2021. The player is married to his gorgeous love Daniel Paniccia, a hockey player. She played for Penn State Nittany Lions and Oakville Hornets during her active hockey career. Liam has kept his social life professional even though he has shared some beautiful photographs with his family's online outlet. 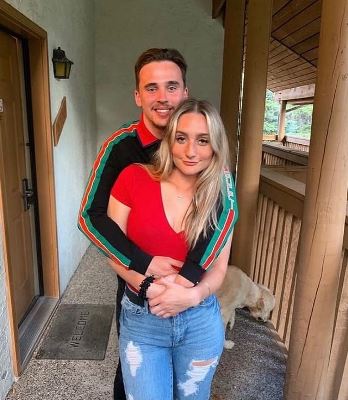 Indeed, Liam took over the internet by storm when he shared a beautiful engagement photo on his Instagram handle @liammillar11. Thier photos were all over the internet, and many fans congratulated them on thier happiest moment. Regardless, both of them have remained silent about his wedding to date. Not to mention, the pair has a lovely daughter who just turned two years on August 23, 2022. Despite his early age, Liam has fulfilled his fatherly role perfectly.

How Much Money Does Liam Make From FC Basel? Net Worth

The Canadian player is known for his flexibility in playing different roles. Notably, the excellent finishing with both legs has created barriers to his opponent. Football is his primary income source, and there is no doubt that he is grabbing a golden opportunity of earning riches from it. Exploring Salary Sport, it estimates that his current net worth is approximately $ 3 Million.

Concerning his salary details, FC Basel pays him £3,64,000 yearly and £7000. For your information, his basic salary at Liverpool was £1,56,000. With such an impressive salary, the player has maintained a pretty good living standard. As listed on March 28, 2020, he valued €3 million, his most elevated active career valuation. In addition, Adidas also endorsed Liam Millar, which also granted him handsome capital in his bank balance.