Lauren Holiday was born Lauren Nicole Cheney on September 30, 1987, in Indianapolis, Indiana. Lauren is among the four children born to Rita Cheney and her husband, George Cheney. She has not shared information related to her parents. She has a brother named Aaron and a sister named Caitlin. After graduating from High School, Lauren enrolled at the University of California, Los Angeles.

Lauren started playing soccer while she was in High School. She was named the school's most valuable offensive player in 2004–05. Holiday went on to finish her High School Soccer career with 118 goals and served 67 assists. He had to graduate in mid-year in 2006 as she needed to attend the training for U-20 Women's World Cup.

Holiday received more than a dozen scholarships for her to enroll in Universities. She was regarded as the Top prospect in Women's soccer in the States. Indianapolis Star Super Team Player winner Lauren enrolled at the University of California, Los Angeles. She carried her phenomenal career in her University team. She became the first player in UCLA history to earn NSCAA/Adidas First-Team All-America honors all four years of her career.

The World Cup Gold Medalist finished her University Career with a total of 71 and 31 assists. After graduating from the University, Lauren signed a contract with Pali Blues. She had another exceptional year with the club winning the Championship title against Washington Freedom reserves with 2-1. Lauren was drafted in the WPS draft in 2010. Boston Breaker picked her and played there for two seasons.

In 2008, Holiday replaced Abby Wambach after she suffered a broken leg in the 2008 Beijing Olympics. The team won the final, where She finished with seven goals in 13 matches. In 2011, Lauren started with FIFA Women's World Cup team and had initial success. However, They lost a crucial game against Japan and were knocked out of the tournament. 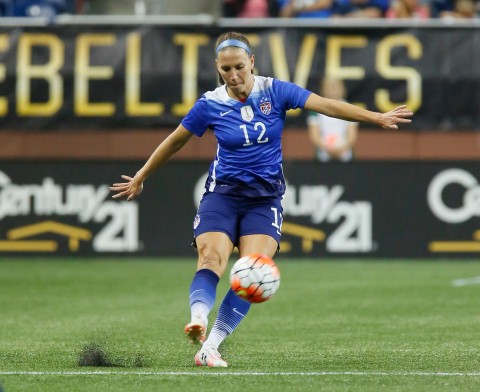 Lauren is a Golf Medalist in Olympic and World Cup SOURCE: Denver Post

In 2015, Lauren won FIFA Women's World Cup, and shortly after the at, she announced retirement from her international career. Holiday also retired from the NWSL at the end of the 2015 season. The Club retired her number 12 jersey in her honor.

Lauren Holiday has an estimated net worth of more than $1 Million. She credits most of her net worth to her successful career of working as a soccer player. She played professionally for several clubs and made thousands of dollars. Moreover, she is also a gold medalist of the USA National Team at the Olympics and World Cup. She got thousands of dollars for her achievement from the national team.

Lauren's Husband, Jrue Holiday, has an estimated net worth of $30 Million. Holiday's agreement with the Pelicans will pay him $126 million. He signed the contract in 2020 and will be receiving more than $20 Million as his annual salary.

Lauren Holiday is living a happy married life along with her husband, Jrue Holiday. Jrue is a famous NBA player. The two first met and began dating in 2008 while they were in their University. The love birds walked down the wedding aisle on July 7, 2013. 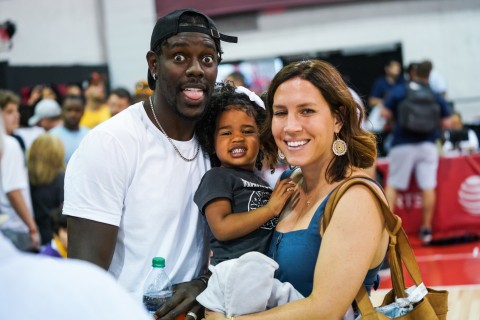 Lauren with her daughter and husband SOURCE: Sports Yahoo

In September 2016, The duo welcomed their first child, a daughter, Jrue Tyler Holiday. During her pregnancy, Lauren was diagnosed with a brain tumor. She successfully removed the tumor in October. Alex Morgan is another famous soccer player living a happy life along with her husband.