Lars Veldwijk is a well-known South African professional football player. He has been playing at the professional level since 2011. Veldwijk plays for Suwon FC in the South Korean Football League, K League 1. Lars plays as a Striker for his club and country.

Lars Veldwijk was born on August 21, 1991, in Uithoorn, Netherlands. He is the son of Harry Veldwijk and his wife. Veldwijk rose to fame through his successful career and has not shared much about his early life and parents. Lars holds dual nationality and plays for the South African national team. Veldwijk stands six feet and five inches tall and weighs 85 kg.

Lars Veldwijk has an estimated net worth of more than $1 Million. The player has earned most of his net worth through his football career playing in England and Korean League. Lars signed a £500,000 with Nottingham Forest. A football player makes a handsome amount from their sponsorship and advertising deals. Veldwijk is an experienced player who must be among the highest-paid player in the league. 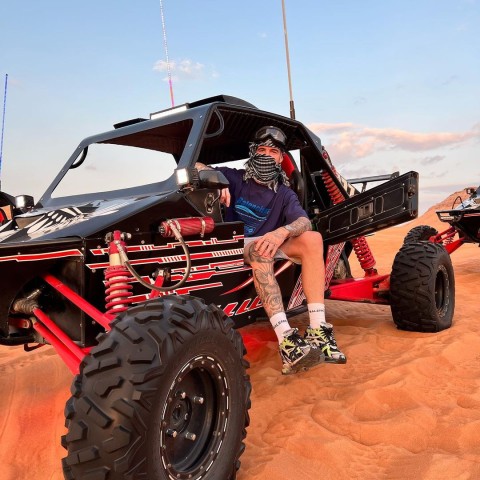 Lars shares a photo of his trip to Dubai SOURCE: [email protected]

Lars is very private about his economic career. Veldwijkis valued at €800,000 as of early 2022. He is very early in his career and will be making millions in the future.

Lars is an active social media user. He is very open about his relationship status. Veldwijk is living a happy single along with his children. The soccer player is famous for his successful career and well-known for his love life. Lars was dating his longtime girlfriend, Monica Gueuze. They had seen each other since early 2017. Lars and Monica opened about expecting their first child together in December 2017. The duo welcomed their first child, Zara-Lizzy, in July 2018. This happy-looking relationship never remained the same. They eventually separated in late 2019. The couple tried very much to keep their relationship but could not. Veldwijk has a son, Mason, born in 2015 from his former relationship. He has not shared about his biological mother.

Lars started training with a local team of SV Argon's youth academy. He trained with the team for some time and then moved to FC Volendam. Veldwijk made his professional debut in 2011 with FC Volendam in the Eerste Divisie. He struggled in his early days and moved to Utrecht. The player was loaned to Dordrecht for a loan season and then moved to Excelsior in the Dutch league for a season.

In mid-2014, Lars signed with Nottingham Forest for £500,000 which could rise to £1 million depending on various clauses. The player played with the club for three-season and moved to Kortrijk for a season but was loaned to Aalesund for a season. He spent his next two seasons playing with Sparta Rotterdam in the Dutch league and then moved to South Korea and signed with Suwon FC  that runs out until December 2022.