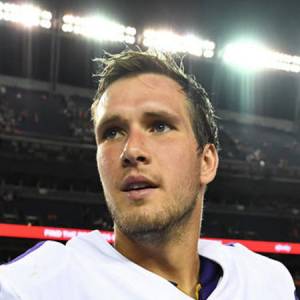 Kyle Sloter is an American professional football player who plays in the National Football League (NFL). As of 2018, Kyle Joseph Sloter currently plays for the Minnesota Vikings as their quarterback. Kyle Joseph Sloter has played for other teams like Denver Broncos.

Kyle Joseph Sloter was born on February 7, 1994, in Atlanta, Georgia to parents, Daryl Sloter and Michelle Sloter. As per his nationality, he is American and belongs to White ethnic group. Further, his star sign is Aquarius.

Kyle Sloter played college football for four years from 2013 to 2016 and signed with the Denver Broncos as an undrafted free agent on May 13, 2017.

In the preseason, he made 31 of 43 passes for 413 yards with three touchdowns and no interceptions for a passer rating of 125.4, the highest of any rookie quarterback. He was ultimately dismissed by the Broncos on September 2, 2017.

Missing my girl a little extra today! I can’t wait to get back to Minneapolis and see that beautiful smile! #getyouaniowagirl

The couple's romantic relationship is going on well and seems to be very happy with each other. They have been dating each other since 2016.

Kyle Sloter who is in his mid-twenties spends most of his free time with his girlfriend. His Instagram posts about his girlfriend show his intense love for her. However, they haven't exchanged marriage vows yet.

Kyle Sloter's Salary and Net Worth

Other than being a famous NFL quarterback, Kyle Joseph Sloter is pretty famous in social media. He has 16.9k Instagram followers and 10.9k Twitter followers.

Kyle Joseph Sloter is not only a world-class athlete but also has a very attractive individual. The famous NFL star is 6 feet 4 inches in height and weighs around 99 kg.