Kwame Brown is a well-known former professional basketball player. He played in the NBA for twelve seasons. Washington Wizards drafted him in the first No.1 overall pick in the 2001 NBA draft. Brown played as a center for his team. Kwame was part of BIG3 basketball ball after retiring from the NBA.

Kwame Brown was born Kwame Hasani Brown on March 10, 1982, in Charleston, South Carolina. He is among the two children born to Willie James Brown and his wife, Joyce Brown. His father was convicted of murdering his girlfriend in 1990 and is serving a life sentence. Kwame has a sibling named Akeem Brown. Brown graduated from Glynn Academy and committed to play for the University of Florida but later declared himself for the draft. Talking about his physical appearance, Brown stands six feet and eleven inches tall and weighs 132 kg.

Kwame Brown has an estimated net worth of more than $40 Million. He has been able to father most of his net worth through his successful career in the NBA. Brown signed a four-year contract worth $18 Million with the Wizards. He took home $3.6 Million as his salary and winning bonus. At the end of 2004, Kwame rejected a $30 Million extension contract with the Wizards and moved to the Lakers. 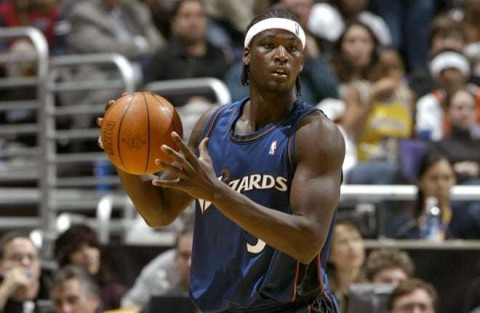 CAPTION: Kwame played in the NBA for Wizards for four seasons SOURCE: Complex

Brown signed a $15 Million contract of two years with the Lakers. After spending two seasons with the team, The player moved to Memphis Grizzlies for a year and took home $9 Million as his salary. In 2008, The Pistons signed him to a two-year deal worth $8 million, with the second year a player option. In 2011, The Warriors signed him for a one-year $7 million contract.

At the end of the 2012 season, the Philadelphia 76ers signed a two-year contract for nearly $6 Million. Totaling his earnings from NBA, it sums to $63 Million.

Kwame has not shared words about his married life in public. As per sources, Brown lived along with his hometown girlfriend, Joselyn Vaughn, from 2002. The duo had three daughters. The family of five lived a happy life. The former player does not show much presence on social media. In 2019, He sued his girlfriend for the custody of their children.

Kwame was part of his High School football team and was rated as the best High School player. He completed his High School career as the school's all-time leading rebounder (1,235) and shot-blocker (605). After completing his High school career, Brown committed to play for the University of Florida but later declared for the 2001 NBA draft. Washington Wizards use their first overall pick on him.

Brown averaged 4.5 points and 3.5 rebounds per game in his rookie year. He finished his four years with the team and could not stand up to the standard and expectation. In 2005, Kwame moved to the Lakers and played for two seasons. Until 2012, Brown moved to three other franchises, and at the end of the 2012 season, Kwame was out of the game after a right hamstring strain, and shortly after that, He announced his retirement. In 2017, Brown played in the BIG3 league for the 3 Headed Monsters.