Kristian Doolittle is an American college basketball player who is currently representing the Oklahoma Sooners of the Big 12 Conference. Moreover, the young talent was named USA Today All-USA Oklahoma's first team during his senior years and earned first-team all-conference, The Oklahoman Super Five, and Class 6A all-state honors as a junior at Edmond Memorial High School.

Edmond, Oklahoma native, Doolittle, was born on 19th October 1997, under the star sign Libra. He holds an American nationality and is from Afro-Ameican ethnic background.

No. 21 – Oklahoma Sooners' small forward, Kristian Doolittle has declared for the upcoming draft. As reported, he has signed with Pensack Sports Management for his NBA representation. Further, that management has represented players such as Miami Heat Guard Kendrick Nunn, Washington Wizard Troy Brown Jr., and others.

A matter of fact, Kristian’s senior season was cut short due to the COVID-19 pandemic. As the only senior, Doolittle averaged 15.8 points, 8.9 rebounds, and 2.0 assists per game while leading the Sooners to a 19-12 record. 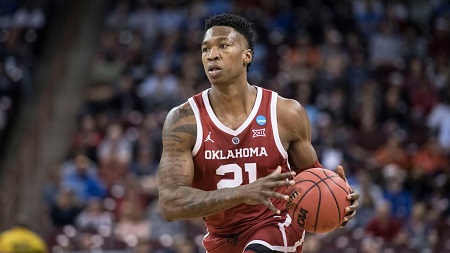 Moreover, various scouts agreed the talent pool in this year’s draft could be much smaller than in years past. He lands at No. 93 on USA TODAY’s Rookie Wire’s Top 100 prospects of the 2020 NBA Draft while NBA Scouting Live ranked him #77 and CBS sports #63.

Even though if he is picked in the second round, he will still have an annual salary in millions. According to the source, the 2nd round draftee will have a three years contract worth around $4,198,912, and a yearly salary of $1,399,637.

When it comes to his personal life, Oklahoma Sooners' small forward is a low key person. Doolittle has reveled less to no information about his personal side. Hence, the information regarding his relationship or girlfriend is the subject of curiosity.

Furthermore, the hunk has set his Instagram account private. As of now, Doolittle is believed to be single.

Kristian Doolittle is the Son of Denise Doolittle and Dwayne, a longtime football and basketball referee. Moreover, his elder brother, Kameron, played college football for Oklahoma State at the wide receiver position.

Doolittle enrolled at Edmond Memorial High School in Edmond, Oklahoma, where he played for the shill basketball team. He was recruited a four-star and the top player from the University of Oklahoma in the 2016 class, and committed to play college basketball when he was a junior in high school.