A member of the multi-billionaire Hunt family, Clark Hunt is the son of Lamar Hunt and grandson of oil tycoon H.L. Hunt. Clark is the founding investor-owner of Major League Soccer (MLS). Following the death of his father in 2006, Clark, his mother, and siblings inherited legal ownership of the NFL's Kansas City Chiefs. Since, he stands as the part-owner, chairman, and CEO of the team.

Dallas, Texas native, Clark Hunt was born on 19th February 1965, under the star sign Pisces. He holds an American nationality and is of white ethnic background.

Clark Hunt Net Worth In 2021 and Properties

Aforementioned, Clark is the third generation of the Hunt family. As of 2021, the Hunt family is ranked #18 in America's richest family with a total net worth of $15.5 billion. The Hunt family's fortune is from oil wildcatter H.L. Hunt. In 2008, H.L's eldest children, the late Margaret and H.L.

Hunt III sold his Hunt Petroleum to XTO Energy for $4.2 billion in cash and stock. Today, his heirs own fortunes ranging from energy, real estate, and sports; sons Ray Lee and W. Herbert own Hunt Oil and Petro-Hunt, respectively.

Among H.L's 15 children: late son, Lamar, is said to have named the Super Bowl. Still, Lamar's children own the NFL's Kansas City Chiefs, a minority stake in the NBA's Chicago Bulls, and real estate assets in Kansas City and Texas: Clark Hunt being the CEO, Charman, and part-owner of Chiefs. According to Forbes, the Chiefs is named the 23rd most valuable NFL franchise at a valuation of $2.5 billion. 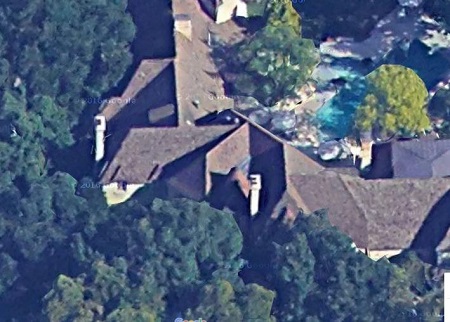 As of 2021, Clark Hunt's net worth is approximately $2 Billion. Among other real estate property, Clark currently resides in his Dallas, Texas's mansion.

Clark Hunt's Wife: Is He Married?

To being: Clark Hunt met his future wife Tavia when he was 25 and she only 19. At the time, Tavia was interning at the Chiefs, at the annual kickoff luncheon. Tavia a former pageant queen who has won Miss Lee's Summit, 1990 Miss Missouri Teen USA, and 1993 Miss Kansas.

After dating for almost a year, Clark and Tavia got engaged in 1991 and tied the knot later two years on 23rd October. The three decades of beautiful marriage have blessed them with three adorable children: two daughters and a son. 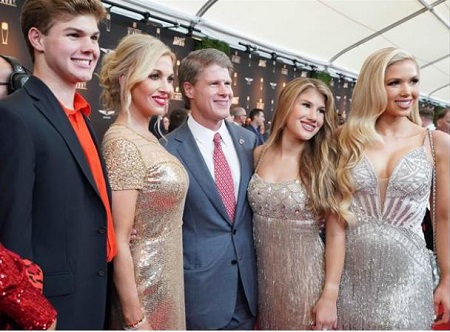 All three children are active in the Hunt family sports empire and the Chiefs’ organization with their mother. What's more?. the eldest daughter, Gracie Hunt, followed her mother’s footsteps and was crowned Miss Texas International 2018. Further, she is a graduate of Southern Methodist University, earning a degree in journalism. Also, she is a spokesmodel at NFL Style and Special Olympics' ambassador.

Similarly, their only son, Knobel Hunt, attended his father’s alma mater, St. Mark’s, in Dallas where he plays football, soccer, and is a track and field athlete. Currently, he is pursuing his bachelor's degree at Southern Methodist University, where his father, grandfather, and sisters graduated.

Now, the youngest Hunt, Ava, also followed her mother's footsteps in modeling and was crowned Miss Pre-Teen Texas International 2018. Besides, she is a gymnast and dancer.

Clark Hunt is the son of Lamar Hunt who was an American businessman who promoted American football, soccer, basketball, tennis, and ice hockey in the United States. Also, he was the founder of AFL, MLS, MLS's Predecessor, NASL, and co-founder of the World championship tennis. Known as a sport magnet, he founded as well as owned the Kansas City Chiefs of NFL, Kansas City Wizards, Columbus Crew, and FC Dallas of MLS. Additionally, Lamar helped to establish the Worlds of Fun and Oceans of Fun theme parks in Kansas City.

Moreover, his grandfather, H.L. Hunt (February 17, 1889 – November 29, 1974), was an American oil tycoon who was apparently the richest in the world at the time of his death. He generated the billions of dollar fortune, by trading poker winnings for oil rights and ultimately securing the title to much of the East Texas Oil Field, which is one of the world's largest oil deposits. H.L. Hunt had a total of 15 children from his three marriages (Lyda Bunker, Frania Tye, and Ruth Ray). 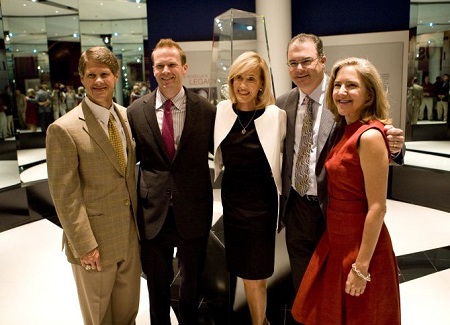 Clark's mother, Norma Lynn Khobel was Lamar's second wife. They tied the knot in 1964. Before Lamar was married to his first wife Rosemary Carr, with who he had two children a daughter, Sharron Hunt, and Lamar Jr. is a president and owner of the Kansas City Mavericks professional hockey team.  Besides, Clark has a bio-brother, Daniel.

On 13th December 2006, Lamar Hunt died due to complications from prostate cancer.

A graduate of Southern Methodist University, Clark Hunt initially worked for two years as an investment banker with Goldman Sachs. Later, he returned to Dallas and began working with his father. He helped his father to run the MLS' Kansas City Wizards until the team was sold in 2006. Also, he owned MLS' Columbus Crew until 2013 and had the franchise first MLS Cup championship on November 23, 2008. Currently, he is a member of the league's board of governors and owns the MLS club, FC Dallas.

In 2005, Clark became the chairman of the NFL's Kansas City Chiefs. After the death of his father in 2006, he along with his three siblings inherited the Chiefs, thus, Clark becoming the operating head of the team. He represents the franchise at owners' meetings and has the final say on personnel changes.

Under Clark, the Chiefs finished with a 12–4 record in 2018 and secured a first-round playoff bye for the 2019 Playoffs. The franchise won in the divisional round made the AFC Championship for the first time since 1994. With the victory, Chiefs were set to host it for the first time in franchise history. Nevertheless, the team lost in overtime to the Patriots.

Chiefs concluded the 2019 season with a 12–4 record and hosted the AFC Championship game for the second time. This time, the Chiefs won their first AFC Championship and brought home the Lamar Hunt Trophy. The Chiefs then won Super Bowl LIV, the second in their history and first in 5 decades.