Kihei Clark is a college basketball player in America who plays in the Atlantic Coast Conference(ACC). He currently plays in the Point Guard position for the Virginia Cavaliers. In 2019, he won the NCAA championship with the Cavaliers. And in 2021, he was included in the Third Team All-ACC for his impressive performance in that year and several match-winning points.

During his time at high school, he averaged 15.2 points per game helping the team reach the semifinal of CIF Southern Section Division 4A. He was awarded Team's MVP in the 2015-16 season averaging 12.5 points and 6.9 assists per game. He finished his senior year with 19.4 points and 7.2 assists.

Kihei Issaiah Clark was born on January 25, 2000, in Tarzana, California, United States. His zodiac sign is Aquarius. The twenty-one years old holds an American nationality and is of Filipino-American ethnic background.

He was born to his father, Malik Clark, and his mother, Sharon. Malik was a former player who played for Hawaii-Hilo in the NCAA Division II Championship. Later he changed his profession to construction and trucking company. While his mother Sharon is originally from the Philippines who moved to Hawaii, US. He was raised along with his two brothers Nalu and Shaka. 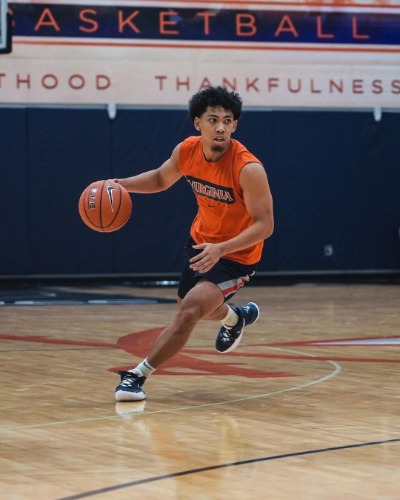 The Filipino-American basketball player completed his schooling at William Howard Taft  High School of Sherman Oaks, California. There, he made a record of 22 assists in a single game and was named Nike Elite YBL's MVP. In 2019, he committed himself to Virginia University despite offers coming from Gonzaga and UCLA.

How tall is Clark?

How much is Clark paid as a college player?

Kihei Clark is a young athlete who is just playing at a college level. So, Kihei is not paid by the college as there are no rules in America that allow them to be paid. Despite this, colleges provide all the educational scholarships to attract excellent young athletes.

Read about:- Jaden’s Contract and Salary; How much is his Net worth? A similar case is with Kihei Issaiah as with other athletes. Recently, the new rules of the NCAA hit the news as it allowed college athletes can be partnered with brands and earn. Despite the rule, Clark is yet to land solid sponsorship deals from the brands.

The young prospect is promising and showing his worth in the field. So, no doubt, there will be brands and sponsors offering him the deals in the future.

Read more:- Sahvir’s Contract and Salary; How much is his Net worth?

The Cavaliers' point guard is very much private about his love life. Till now, he has not shared a word about his girlfriend. Though the player is an active social media user, he has never shared his photos with any girls. So, following his timelines, it seems like he is single as of 2021.

Read about:- Is Will Rich Dating?