Vic Fangio is an American football coach by profession who presently holds the head coach position of the Denver Broncos in the NFL. He was appointed for the position in January 2019. And in his first season at Denver, the team finished second in the AFC West with a record of 7-9.

Fangio's unique style of defense is being very popular in the NFL. Even top teams had started following the technique of Vics. While he worked as a defensive coordinator at Chicago Bears, the Bears ranked 10th from 30th in total defense in just 10 years.

Vic was also awarded Assistant Coach of the Year by PFWA and AP NFL in 2018.

Who is Vic Fangio? (Family, Education, and Early Career)

Victor John Fangio was born on August 22, 1958, in Dunmore, Pennsylvania, US. Vic does not come from a sports background.

His father Vic Sr. was a tailor from Scranton and he had four siblings. Not a single one of them played high school sports. Most of the information regarding Victor's family and early life is still under the radar. Fangio went to Dunmore High School in northeast Pennsylvania where he played in a defensive position. He attended East Stroudsburg College and later returned to Dunmore as a linebackers coach.

He also worked as a defensive coordinator at Milford Academy and defensive assistant coach for the Baltimore Stars.

How much is Vic's Net worth?

Denver Broncos head coach Vic Fangio has an estimated net worth of $7 million. He earned most of his income from coaching in different teams in his 4 decades of career. During Fangio's early career, in the 1980s, he used to earn $400 thousand per year as a defensive coordinator. It has evolved enormously with his experience.

Vic Fangio is currently having an open relationship with his longtime girlfriend Kathy. The couple lives together in San Francisco and is living happily. There are no sources claiming the conflict between the two pairs.

However, Fangio has already married before dating Kathy. His former wife's name is Anne Patricia Doyle. The pair first met in the 1980s and later got married in 1990. 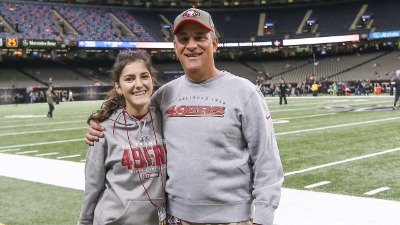 But after few years, the relationship didn't work out for them so Vic divorces his wife Anne. Now the former husband-wife does not live together anymore.

The 2018 AP NFL Assistant Coach of the Year is blessed with 2 children from his former wife Anne. His elder son, Christian Fangio currently works as a specialist at a multi-billion company named Apple. Previously, he used to be an inside linebacker at Marriotsville.

Fangio holds a special relationship with his younger daughter Casie. Casie attended Towson University and graduated with a Bachelor of Science in Nursing. She is also a registered nurse and was commissioned as a second lieutenant in the Army.