Kenyan Drake is a well-established American football player. He has been playing in the National Football League for the Las Vegas Raiders since 2021. Drake plays as a running back and kicks returner for his team. Kenyan was named the CFP national Champion in 2015.

Kenyan Drake was born on January 26, 1994, in Powder Springs, Georgia. He is among the two children born to William Drake and his wife. Much about his parent is still under the radar. Drake graduated from Hillgrove High School and enrolled at the University of Alabama. Kenyan stands six and one inches tall and weighs 96 kg.

Kenyan Drake has an estimated net worth of more than $10 Million. He credits most of his net worth to his successful career as a football player. Kenyan is receiving a salary of more than $7 Million from his contract with the Las Vegas Raiders. In early 2021, The player signed a two-year deal worth up to $14.5 million, with $11 million guaranteed. 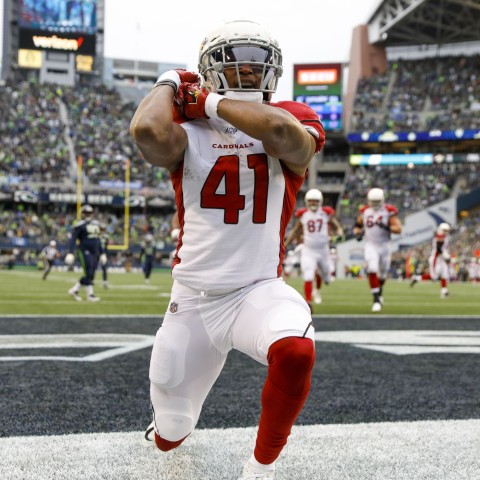 Kenyan celebrated after winning a match SOURCE: The Huffle

In 2016, Kenyan signed a three-year contract with total earnings of $2.5 Million with the Miami Dolphins. He received an annual salary of $500,00 and the remaining $1 Million as his signing bonus. In 2019, Drake got traded to Arizona Cardinals and earned a salary of $1,115,610. At the end of the season, The player moved back to the Dolphins and took home his salary of $952,941.

In early 2020, the Cardinals signed a one-year deal worth  $8.483 million deal. After the season, He signed a two-year, $14.5 million contract with the Raiders. Kenyan is very much early in his carer and shall be making millions in the future.

Who is Kenyan Dating? Know About His Girlfriend and Relationship Status

Kenyan played numerous sports in his middle school and stuck with American football in High School. As a senior, he rushed for 1,610 yards with 18 touchdowns and was named the Gatorade Football Player of the Year for Georgia. The player committed to play for the University of Alabama. In his freshman year, Drake rushed for 281 yards on 42 carries with five touchdowns and finished his sophomore year rushing for 694 yards on 92 carries with eight touchdowns and had 12 receptions for 135 yards and a touchdown.

Drake had an injury in his junior year and played in just five games. After graduating in 2015, He listed his name for the 2016 NFL draft. Miami Dolphins drafted him in third round overall 73rd pick. Kenyan played in all 16 games as a rookie, rushing for 179 yards and two touchdowns. After having a good three seasons with the Dolphins, He got traded to The Cardinals and played with the team for two seasons. In early 2021, Drake signed a two-year contract with the Las Vegas Raiders.