David Cobb is a professional American football player. He has played in the NFL for two seasons but has a free agent in 2021. Cobb plays as a running back for his team. David played in the Alliance of American Football with the San Antonio Commanders for a season.

David Cobb was born on June 3, 1993, in Killeen, Texas. He is among the three children born to Caesar Cobb and his wife, Nina Cobb. His father served in the United States Army. David has two brothers Caesar Cobb II and Daniel Cobb. Cobb graduated from Ellison High School and enrolled at the University of Minnesota. Cobb stands five feet and eleven inches tall and weighs 99 kg.

David started playing football in his middle school and stuck with American football in High School. He completed his High School rushing for 2,946 yards and 35 touchdowns. Cobb committed to playing college football for the University of Minnesota. David played in eight games his freshman and sophomore seasons in his freshman year, combining to rush for 65 yards on 11 carries.

Cobb did not have a good season in his sophomore year and played in 13 games with seven starts and led the team with 1,202 yards on 237 carries with seven touchdowns in his junior year. In his senior year, David broke Laurence Maroney's school record for rushing yards in a season with 1,626 yards on 314 carries with 13 touchdowns. He listed his name for the 2015 NFL draft.

Tennessee Titans drafted him fifth round overall 138th pick but placed him on injured reserve with a designation to return. In the next season, Cobb appeared in just seven games and then signed with Pittsburgh Steelers. However, They also released him. After having ups and downs in the League, David signed in The Spring League with Saskatchewan Roughriders. In September 2018, He signed with the San Antonio Commanders of the Alliance of American Football for the 2019 season. 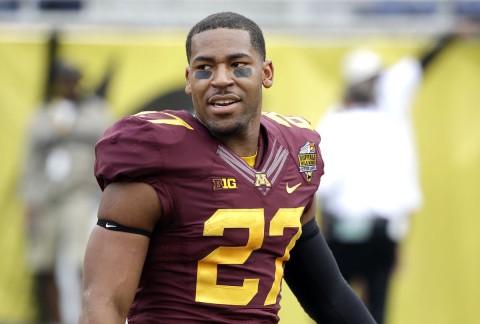 David played in the NFL for a season with Titans SOURCE: Baltimore Sun

David was involved in a romantic relationship with Jay Tunstill for some time while he was attending the University of Minnesota. Nothing much about them since then is known to the public.

David Cobb has an estimated net worth of more than $1 Million. However, He signed with two major clubs in the NFL and was a fifth-round pick in the NFL. The average salary of an NFL rookie player is more than $600,000. Cobb has played in numerous leagues in North America. He has yet to share a word about his contract and earnings with the media.