Kenneth Walker III is a rising American football player. He has been playing in the Big Ten Conference for the Michigan State Spartans. Kenneth plays as a running back for his team. Walker spent his initial two years playing for Wake Forest University.

Kenneth Walker III was born on October 20, 2000, in Arlington, Texas. He is the son of Kenneth Walker Jr and his wife, Shaunteshia Brown. Kenneth graduated from Arlington High School and enrolled at Wake Forest University with a major in communication. Much about his parent and siblings are still under the radar. Talking about his physical appearance, Kenneth stands five feet and ten inches tall and weighs 95 kg.

Kenneth played several sports in middle school. He committed to playing football in High School. Walker was an extremely productive running back at Arlington High School. He rushed for 3,485 yards on 493 carries, including 13 100-yard games, with 41 in his prep career. As a junior, Kenneth led the  Tigers to the 6A state playoffs and rushed for 1,205 yards and 17 touchdowns with seven 100-yard games. At the end of the season, The player was named first-team All-Region 7-6A at running back and second-team as a kick returner. 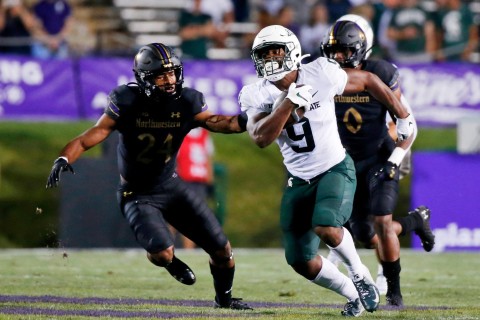 In his senior year, Walker rushed for 1,403 yards with 27 touchdowns despite missing three games. After graduating from High School, Kenneth received numerous offers to play football but committed to play for Wake Forest University. In his freshman year, The player ranked third in the ACC among first-year students with 579 rushing yards (44.5 ypg) on 98 carries (5.9 avg.) with four touchdowns. Walker was named to the Doak Walker Award Watch List after rushing for 579 yards for the second year in a row in his sophomore year.

For his junior year, Walker transferred to Michigan State University. The player rushed for 264 yards and four touchdowns in his debut match. He was shortlisted for two titles. Many expect him to list his name for the 2022 NFL draft but let's watch what unfolds ahead.

The American football player is very much private about his personal life. He has not shared a word about his love life and girlfriend in the media. It is believed that Kenneth is single as of late 2021. Following his social media account posts, it's filled with photos of his games, training, and friends. Walker is very early in his career and must focus on his career rather than spending time with people.

Kenneth Walker is yet to start his professional career, and the NCAA does not allow its universities to pay its athletes. Walker has received scholarships that will help him to cover most of his expenses. He is among the top-rated player for the upcoming drafts. Kenneth is sure to land a multi-million dollar contract in the coming draft.