Justin Skyler Fields a.k.a. Justin Fields is an American college football dual-threat quarterback who plays for the Ohio State Buckeyes. He started his collegiate career with the Georgia Bulldogs and transferred to Ohio State following his freshman year.

Atlanta, Georgia native, Justin Fields was born on 5th March 1999, under the star sign Pisces. The twenty-one years old is an American by nationality and belongs to the white ethnic background. Further, he stands 6 ft 3 in (1.91 m) tall and weighs 225 lb (102 kg).

Justin Field is a college athlete who is pursuing his study as well as playing football as a sophomore at Ohio State University. As a matter of fact, college athletes do not get paid for the college team. NCAA reported, the college athlete receives Grant-in-aid: $27,923, Coaching: $70,000, General support: $11,607, Medical: $970, Game tickets and Future earnings impact: $6,500, which is $120,000 per annum.

Though this cash isn’t depositing into their bank account each year, this figure is going a long way to pay for their education, top-notch training, and skills they’re learning from coaches and futures as professional or minor-league basketball players or employees. 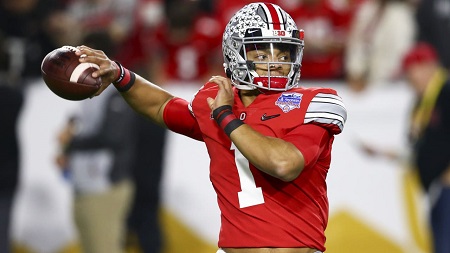 Besides, Ohio State quarterback Justin Fields will be eligible for the 2021 NFL draft. Reportedly, he is the No.2 overall selection in the NFL draft. If he goes pick in the draft, Field will have his salary in millions. The average NBA player salary is $7.7 million.

The love life of Justin Fields is completely in the dark. There is less to no information about his love affair or girlfriend, not even his relationship status. The quarterback has successfully maintained his personal life a low key.

Active on Instagram with 416k followers, his post on the page is mostly about football games. For now, Field is possibly single.

Justin Fields was born to mother, Gina Tober, and father, Ivant “Pablo” Fields, who was a star football player and was a linebacker for Eastern Kentucky Univesity during his own college days. Justin’s parents are no longer together.

Furthermore, he has two sisters: Jaiden who plays softball player at the University of Georgia, and another Jessica who is in eighth grade.

Fields finished his high school at Harrison High School in Kennesaw, Georgia, where he totaled 4,187 passing yards, 41 passing touchdowns, 2,096 rushing yards, and 28 rushing touchdowns. Rated a five-star recruit and was the highest-rated dual-threat quarterback in the class of 2018 by Rivals.com, 247Sports.com, and ESPN, Fields was second behind pro-style quarterback Trevor Lawrence.

On October 6, 2017, he committed to play for the University of Georgia after withdrawing a previous commitment to play for Penn State. Nevertheless, after a freshman year, he transferred to Ohio State.