CJ Stroud is a rising American football quarterback. He is currently playing in the Big Ten Conference for the Ohio State Buckeyes. Stroud plays as a quarterback for his team. CJ was part of the 2021 Suger Bowl and CFP National Championship team.

Coleridge started playing football in middle school. He played numerous sports early on and committed to playing football in High School. The player was the Inland Valley Daily Bulletin offensive player after passing for 3,878 yards and 47 touchdowns in his senior year. In the game of Elite 11, Stroud was named the MVP. Coleridge was selected to play in the 2020 All-American Bowl. 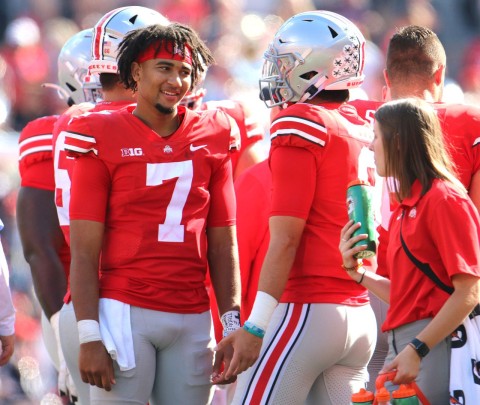 CJ shares about his game experience with his teammate SOURCE: Cleveland News

Stroud received numerous university offers but chose to remain with Ohio State University. The player spent his preseason as a backup for Justin Fields. He did not attempt any passes but had a 48-yard rushing touchdown. CJ got his chance after Fields listed his name for the 2021 NFL draft in his first year. Coleridge earned Big Ten Freshman of the Week honors after throwing 294 yards and four touchdowns in his debut game against Minnesota.

Stroud repeated a similar game against Oregon and the honor the following week. He has appeared in ten games in the ongoing season, starting in all of them. The player is among the best to list the name for the upcoming NFL draft.

Who is CJ Stroud Dating? Know About His Girlfriend and Relationship Status

CJ is an active social media. He regularly shares numerous photos of his games, training, and friends on his timeline. Stroud is very much private about his love life. Following his timeline and online sources, Coleridge is believed to be single as of late 2021. CJ tries to pass the ball to his friend SOURCE: Tucker News

CJ is very much early in his career and must be focusing on his career. On the other hand, The player could secretly date someone and wait for the right time to share his love life.

CJ is yet to start his professional career. Per the NCAA rules, Universities are not allowed to pay their athletes to represent the university in the NCAA matches. Universities help the player with scholarships that will cover most of their expenses. Stroud will be making millions in the future. The salary of a first-round pick player in the NFL draft is more than $5 Million.