Kenneth Howard Norton Jr. a.k.a. Ken Norton Jr. is an American football coach and retired player in the National Football League (NFL) who stands as the defensive coordinator for the Seattle Seahawks. Earlier, served as the defensive coordinator for the Oakland Raiders. About his playing career, he finished his collegiate career at UCLA and was drafted in the second round of the 1988 NFL Draft, and played thirteen seasons for the NFL's Dallas Cowboys and San Francisco 49ers. Also, he is the only player in NFL history to win a 3X Super Bowl ring consecutive years.

Jacksonville, Illinois native, Ken Norton was born on 29th September 1966, under the star sign Libra. The fifty-four years holds an American nationality and is of Afro-American ethnic background. Regarding his physique, he stands 6 ft 2 in (1.88 m) tall and weighs 236 lb (107 kg).

As of 2020, Ken Norton Jr. has an estimated net worth of $8 million, mostly earned from his NFL career as a player and now coach. Currently signed to the Seattle Seahawks, his salary is no less than the six-digit figure. According to the source, the average NFL defensive coordinator made approximately $850,000.

Back in 2011, Ken Norton Jr. sold his Marina del Rey home for $1,999,000. The four-level contemporary house was built in 2000 that consists of an elevator, a media room, and a top-floor gym. Further, the real estate features five bedrooms and six bathrooms are contained in 5,800 square feet of living space. Besides, there is no other information regarding his financial aspects.

Ken Norton's Wife: Is He Married?

Ken Norton Jr. is a married man. He tied the knot with his girlfriend, Angela, a long time ago. The couple shares three children: Brittney, Sabrina, and Ken III. 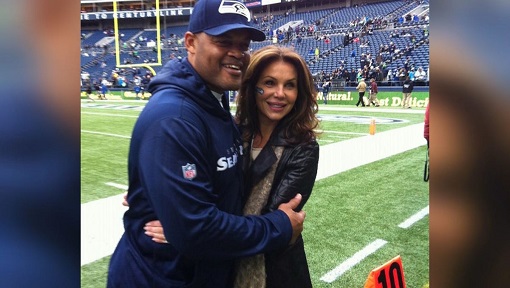 Ken said. "To have a strong marriage, you must involve the wife in the work. You can't have them separate. She has really stepped up to be a second mom to my players." Moreover, Angela has hosted the players on the team for dinners and holidays for years.

He played football at his high-school Westchester High. Originally a tailback, he averaged 8.8 yards per carrying as a senior. He enrolled in college but did not play football until his junior year at UCLA.

Upon retiring in 2000, Ken served as a radio and television commentator and analyst as well as coached football at Hamilton High School in Los Angeles, California. In 2004, he became the coaching staff of the USC Trojan football team under Head Coach Pete Carroll. On January 7, 2009, he was promoted to Assistant Head Coach for Defense at USC.

On 11th January 2010, Ken joined Seattle Seahawks. On February 6, 2015, he was named the defensive coordinator for the Oakland Raiders. After the Raiders suffered a blowout 33 to 8 loss to the New England Patriots, he was fired on November 21, 2017.