Kayvon Thibodeaux is an American football player who plays in the defensive end position for Oregon Ducks. Kayvon was selected as one of the top-rated players of the 2019 class.

In 2018, USA Today named Thiobodeaux High School Football Defensive Player of the Year. That year, he recorded an incredible 18 sacks and 54 tackles. In both 2018 and 2019, he was named High School All-American by USA Today. 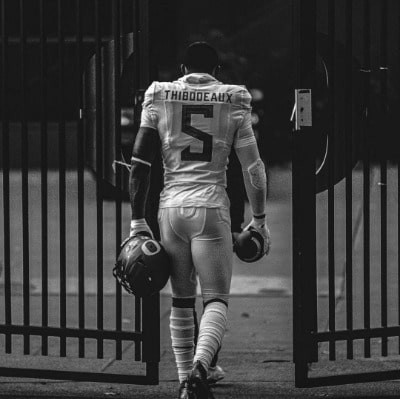 The second highest-rated player in the 2019 class Kayvon also won Morris Trophy in 2020 and was named First Team All-Pac-12 in 2020. He is highly athletic with speed and power making him one of the nation's top prospect defensive ends.

Who is Kayvon? Family and early life

Kayvon Thibodeaux was born on December 15, 2000, in South Los Angeles, California, United States. He attended and played high school football at Oaks Christian School and was the second-highest-rated player in the 2019 class.

Two times USA Today High School All American's mother's name is Shawnta Loice and his father's name is Angelo Thibodeaux. His mother Shawnta is also his manager and was key in deciding his commitment to Ducks. Having offers from various colleges, he committed to Oregon Ducks to play college football and is one of the best defensive ends in all the nation.

Ducks defensive end Thibo posses a height of 6 feet 5 inches and currently weighs 113 kg.  In fact, he was already 6 feet 2 inches while he was 13 years old.

He has a muscular body and has black hair and eyes.

Who is Kayvon dating? (Affair and Girlfriend)

Kayvon Thibodeaux has never posted about his relationship status on his social media. He is highly active on Instagram and Twitter but never revealed his love life. It seems Kayvon does not like to show his girlfriend in public.

Or, it might be that the 2020 Morris Trophy winner is just 20 years of age and is early in his career. He must be focused on playing in NFL without spending time in romances. Being one of the to recruit of his class, he aims to play for NFL.

Kayvon Thibodeaux Net worth and Earnings

The net worth of Kayvon Thibodeaux is estimated to be $200,000 approximately. However, the college footballer has never confirmed his monetary worth in media.

The US has a rule of not paying college athletes. But changes were made recently for allowing them to have partnerships with sponsors. Being a college player, Ducks does not pay him for playing football for them. But college covers these education expenses. 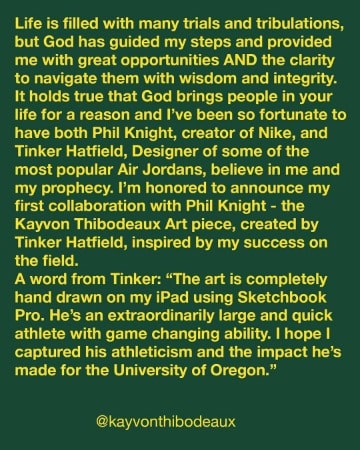 On July 7, 2021, Kayvon made the announcement on his Instagram about his partnership with Phil Knight and Tinker Hatfield. Phil is a co-founder of the shoe brand Nike and Tinker is Nike's Vice President for Design and Special Projects.

Kayvon must have made an incredible amount of money from this partnership with Nike.

I am honored to announce my first collaboration with two true pioneers: Phil Knight and Tinker Hatfield.
Link in Bio to buy the Art
(limited edition)