Kalen Ballage is an American football running back who is currently signed to he New York Jets of the National Football League (NFL). He finished his collegiate career at Arizona State and was picked by the Miami Dolphins in the fourth round with the 131st overall pick.

Peyton, Colorado native, Kalen Ballage, was born on December 22, 1995, under the star sign Capricorn. As per nationality, the twenty-four years old is an American and belongs to the Afro-American ethnic background. Regarding his physique, he stands 6 ft 2 in (1.88 m) tall and weighs 231 lb (105 kg).

How Much Is Kalen Ballage's Net Worth? Contract & Salary

As of 2020, Ballage's net worth is approximately $1 million.

Kalen Ballage's Girlfriend: Is He Dating?

There is no confirmed relationship of New York Jets' running back, Ballage. Additionally, his Instagram post and story suggest the hunk is not dating anyone. His IG post is all about his career and some snaps with friends. At the moment, Ballage is believed to be single.

It seems like, Ballage is focused on his rising career. For now, his personal life is under wrapped.

Kalen was born to LaVonda Ballage and Reggie Ballage. His uncle Howard Ballage was a running back and a return ace at Colorado and also played in the Canadian Football League and for the Denver Gold of the United States Football League. His other uncle, Pat Ballage, was a standout defensive back at Notre Dame and was with the Indianapolis Colts for two seasons. 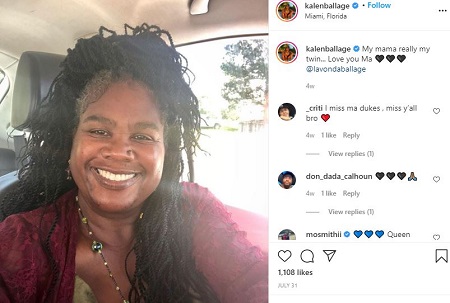 Kalen's father, Reggie, and his aunt, Beverly, were multisport standouts at Pueblo South. They're all under the family tree of Kalen's's grandfather, Othell Ballage, a career Army man who served in Korea and Vietnam and was awarded the Bronze Star and the Meritorious Service Medal.

He enrolled at Falcon High School where he rushed for 2,690 yards, while averaging 8.5 yards per carry and scored 35 rushing touchdowns in three years on varsity. On 17th January 2013, he committed to Arizona State.

At the 2018 NFL Draft, the Miami Dolphins picked Ballage in the fourth round with the 131st overall pick, using the fourth-round pick previously acquired from the Philadelphia Eagles in a trade that sent Jay Ajayi to Philadelphia. he made his NFL debut in Week 4, against the New England Patriots, recorded a three-yard rush in the 38–7 loss.