Mekhi Becton is an American football offensive tackle who is currently signed to the New York Jets of the National Football League (NFL). He finished his collegiate career at Louisville and was drafted by the Jets in the first round of the 2020 NFL Draft.

Highland Springs, Virginia native, Mekhi Becton was born on 18th April 1999, under the star sign Aries. The twenty-one years holds an American nationality and belongs to the Afro-American ethnic background.

How Much is Mekhi Becton Net Worth In 2020? Salary & Contract

From Highland Spring High School to Louisville to NFL

Becton enrolled at Highland Springs High School where he was regarded as a three-star prospect, ranked as the No. 43 offensive tackle and No. 405 overall recruits in the 247Sports Composite.

Becton was recruited by 31 schools to play football. On February 1, 2017, on National Signing Day, he had narrowed the choice to five schools: Louisville, Virginia, Virginia Tech, Michigan, and Oregon, ultimately signing Louisville. While at university he earned the 2019 Jacobs Blocking Award and First-team All-ACC.

In the 2020 NFL Draft, Becton was picked with the 11th overall pick by the New York Jets. In Weeks 1, he made his NFL debut against a solid edge rusher in Jerry Hughes.

Semone Becton is the name of Mekhi --the Jets' newly drafted offensive tackle. She said, “Although it was only flag football, I remember him going out and being scared that he was going to get hit. Also, Becton added, Mekhi started playing at the age of four and she as a mother has always been excited to see him play. Further, Mekhi has a brother.

Neither married nor single, Mekhi Becton is currently dating his girlfriend, Biobca Dunham, who is more than qualified as a former starter for Louisville Women's Basketball. Becton and Dunham are something of a Louisville love story. However, they didn’t initially meet on campus as student-athletes. Instead, it was through a direct message on social media. Before long, the two made plans to meet up and the rest is history. 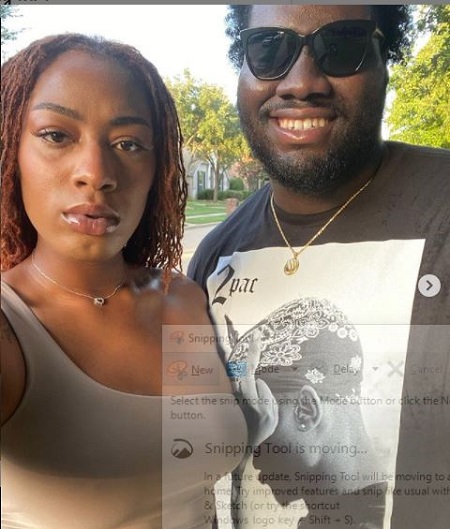 On 16th July 2020, Mekhi wished her bae, a happy anniversary via IG. The caption in the post reads, "HAPPY ANNIVERSARY BABY GIRL!! This has been the best year I could ask for I love you so much I can’t thank you enough for all the things you have done can’t wait for what the future has in store for us one year down forever to go".